On campus with… Professor Ed Kruzins 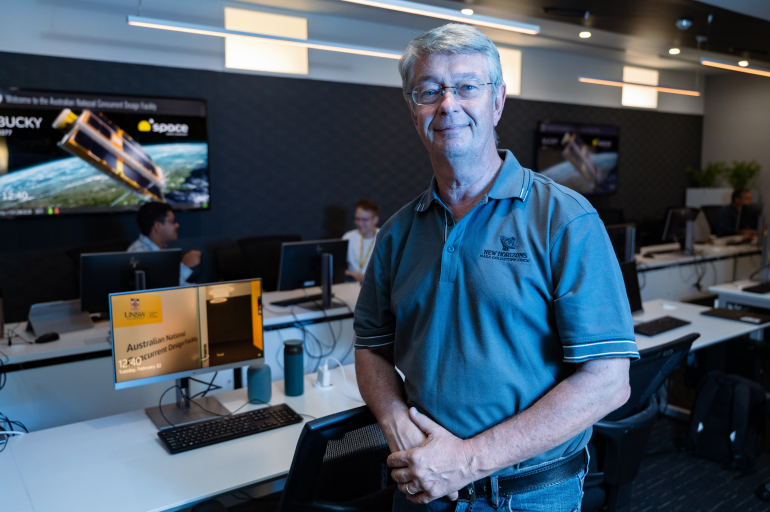 “Be careful – once space takes hold of you it will not let you go.”

That’s the advice of UNSW Canberra’s Professor of Practice Ed Kruzins to anyone thinking of getting involved in the “very addictive” field of space.

It’s a lesson he knows all too well. After more than 40 years in the industry – most recently as the Director of the Canberra Deep Space Communications Complex (CDSCC) – Professor Kruzins retired in February 2021.

Before the year was out, he had accepted the role of Professor of Practice with UNSW Canberra Space.

Here, he draws from his previous experiences and contacts that he has made throughout the global space community.

Like many in the industry, his career began overseas in a time where space opportunities were virtually non-existent in Australia.

“I began as a physicist, I was always interested in space and spacecraft and things like that, so I built spacecraft for a while when I was in Europe,” he said.

“I was one of these backpacking Australians who couldn't get a job here in the late 70s early 80s – certainly not in space.

“I was lucky. I got a job out working at British Aerospace Space Systems UK and built communication satellites with a bunch of other Australians. Some have stayed, some came back.”

He returned to Australia and worked for Defence Science and Technology Organisation before moving on to “the coolest job in Australia” the Director of CDSCC.

After decades in the industry, Professor Kruzins has seen tremendous growth in Australia and said UNSW Canberra and more broadly, the university sector, is well placed to play a major role the country’s space efforts.

His work at the university is varied and includes laying the groundwork for Australia to contribute to global efforts in asteroid detection and exploring deep space laser (optical) communications that could return high-definition images of space exploration events back to Earth in real time.

“For example, when the first man or woman lands on Mars, NASA would like to have high-definition TV beaming back in full colour – and you can only do that through something like a deep space laser link coming back to Earth,” Professor Kruzins said.

“Australia's already got a real niche in this area, and could contribute to the world community by locating optical terminals in Australia and providing our unique geographic location to support global efforts for optical communications from space.”

In addition to his research, Professor Kruzins is passionate about building relationships with other universities to strengthen the country’s space sector.

Also an Adjunct Professor with the University of Adelaide, he said cross-university collaborations were integral.

“The universities should build together,” he said.

“It’s a challenging environment out there with a lot of current excitement in the industrial space sector, but the thing that fuels industry is university and research.”

So, for those prepared to “let space take hold”, he said it’s a great time to get involved. But it requires tenacity, patience and hard work.