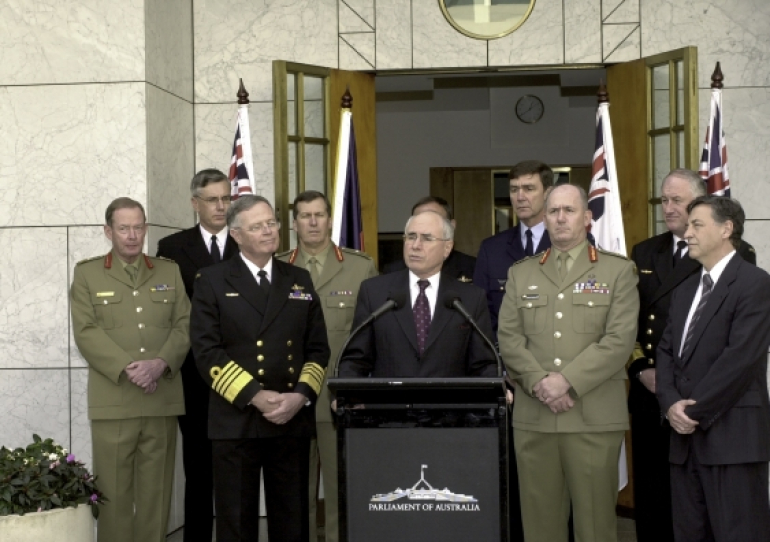 Every year, the National Archives of Australia releases the cabinet records from 20 years earlier, and this year’s batch is out today.

This release, from the cabinet records of 2002, is framed by two events of the previous year.

The Howard government quickly introduced legislation to forbid “unauthorised arrivals” from landing on the Australian mainland. It also determined that those arriving by boat would be processed offshore.

The second event of 2001 was the Al-Qaeda terrorist attacks on the US mainland on September 11. These attacks ushered in a new securitised era in global and Australian politics that has lasted to the present day. They also led to two wars in which Australia participated. The first, in Afghanistan, lasted from 2001 until 2022. The second, the intervention by the “coalition of the willing” in Iraq, was launched in 2003 following decisions in Washington in 2002.

The two events of 2001, the Tampa and 9/11, overwhelmed Labor’s campaign and contributed to the third consecutive victory of the Coalition parties in the federal election held in November that year. 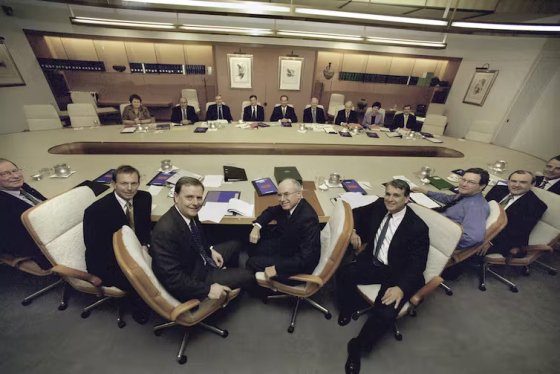 The ‘Pacific Solution’ and immigration

Many of the cabinet records of 2002 relate to the Howard government’s continuation of its “Pacific Solution”.

They include offshore processing in Papua New Guinea and Nauru, building a new immigration detention facility on Christmas Island, and revamping immigration centres on the mainland.

A conference in Indonesia in February 2002 led to the “Bali Process”, an official international forum to facilitate discussion and information-sharing on issues related to people-smuggling.

Other papers relate to Australia’s normal immigration program, which included a “special humanitarian program” for refugees not coming by boat.

Thus, refugees attempting to come by boat were excluded. But others who were lucky to be plucked from refugee camps around the world prospered.

Four of the 2022 World Cup Socceroos squad were born in Africa and three were refugees who entered Australia under the special humanitarian program. Defender Thomas Deng, for example, was born in Kenya to parents who had fled Sudan and moved to Australia in 2003.

Other highlights of the cabinet papers relate to national security, foreign policy, defence and counter-terrorism.

The emblematic moment of 2002 came tragically for Australia on October 12, when the Jemaah Islamiyah terrorist group detonated a bomb in the tourist district of Bali. More than 200 people were killed, 88 Australians among them. Two short cabinet minutes of oral reports to cabinet refer to the enormous amount of work done by agencies, particularly the Department of Foreign Affairs and Trade, in the Bali crisis.

Other papers relate to peace-keeping operations in trouble spots in the region, including East Timor, Bougainville and the Solomon Islands. The operation in the last was an overture to the Regional Assistance Mission to Solomon Islands, launched in 2003.

There are many submissions from Defence Minister Robert Hill on the defence program and acquisitions. This was was the year Hill made the strongest official criticism yet of the “Defence of Australia” strategy that had governed Australian defence policy since the 1980s.

Hill presaged a new direction for strategy when he remarked:

It probably never made sense to conceptualise our security interests as a series of diminishing concentric circles around our coastline, but it certainly does not do so now.

The strategic debate in which Hill engaged in 2002 continues vigorously 20 years later.

Climate change, the environment and heritage

Issues relating to climate change, the environment and heritage occupy as prominent a place in Howard’s 2002 cabinet as they do today.

Critically, following the lead of US President George W. Bush, cabinet decided not to ratify the 1997 Kyoto Protocol.

The European Union and Japan ratified the protocol in 2002. But it was not until 2005, after ratification by Russia and Canada, that the protocol came into effect. Australia’s cabinet accepted advice not to burden its emissions-intensive, trade-exposed industries by accepting commitments not also accepted by competitors.

The decision not to ratify in 2002 was symbolic of Australia’s failure to sustain a meaningful climate change regime in the years up to 2022.

Deputy Prime Minister John Anderson made several submissions on transport and regional policy. In one, cabinet decided not to proceed with a proposal for a very-high-speed rail network between Brisbane and Melbourne on economic grounds. Now, 20 years later, the Albanese government has reversed the decision.

Communications Minister Richard Alston obtained cabinet approval for a package of significant media reforms with detrimental consequences for Australia’s media diversity. These could not, however, be implemented until after 2004 when the coalition parties gained control of the Senate.

Many other submissions relate to economic policy, including the first Integenerational report, welfare policy, health policy and agreements with the states on matters such as housing.

One approved a review of the operation of the Aboriginal and Torres Strait Island Commission, a body established under Hawke and dissolved in 2005.

In another, the government decided not to proceed with recommendations of the Council for Aboriginal Reconciliation, including for a treaty and recognition of Indigenous people in a new preamble to the Constitution.

In 2007, just before its defeat, however, Howard changed his mind, at least on the Constitutional question.

Arguably, Howard’s 2007 change of mind was an important step in the current process towards a constitutionally enshrined Indigenous Voice to Parliament. 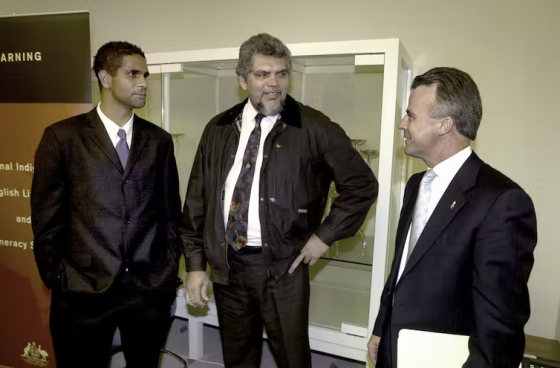 Not every subject came to cabinet and some are only referenced by short minutes or oral presentations by ministers.

There is no submission, for example, on Howard’s finalisation of a A$25 billion natural gas deal to China. In this, Howard took an important step in the evolving trade relationship with China.

But 20 years later, the Australian people are suffering from failure by the Commonwealth and the states to establish a gas reservation policy on Australia’s east coast.

Likewise, there is only a short minute on Howard’s discussions with Bush in June 2002 and too little to indicate what significance they may have had to the subsequent intervention in Iraq.

Cabinet records are only the top of a pyramid. Records of individual agencies (which may be requested by individual researchers separately after 20 years) are equally important to the historical record.

This makes it imperative for the the National Archives to be adequately resourced to carry out its essential role as the custodian of the records of the Australian people.

To that end, discontinuing the efficiency dividend on the National Archives and other struggling cultural institutions would be a welcome start.