EXPLAINER: why is the South China Sea such a hotly contested region?

US and Australia rejected large parts of China’s extensive maritime claims in the South China Sea, as well as territorial claims by any state to undersea reefs.

More worryingly, the US is also pressuring Australia to join its freedom of navigation exercises in the sea — a move likely to further anger China." data-share-imageurl="">

In the past week, both the US and Australia rejected large parts of China’s extensive maritime claims in the South China Sea, as well as territorial claims by any state to undersea reefs.

More worryingly, the US is also pressuring Australia to join its freedom of navigation exercises in the sea — a move likely to further anger China.

As tensions in the South China Sea mount, it’s important to understand how this dispute began and what international law says about freedom of navigation and competing maritime claims in the waters.

Creeping militarisation of the sea

In 1982, the UN Convention on the Law of the Sea was adopted and signed, formalising extended maritime resource claims in international law. At this time, no fewer than six governments had laid claim to the disputed Paracel and Spratly islands in the South China Sea.

Since then, there has been a creeping militarisation of the waters by nations seeking to secure extended maritime resource zones.

In 2009, Vietnam began reclaiming land around some of the 48 small islands it had occupied since the 1970s. In response, China began its much larger reclamations on submerged features it first began to occupy in the 1980s.

Bu 2016, these reclamations had resulted in three military-grade, mid-ocean airfields that sent shockwaves around the world, provoked in part by China breaking its own pledge not to militarise the islands. 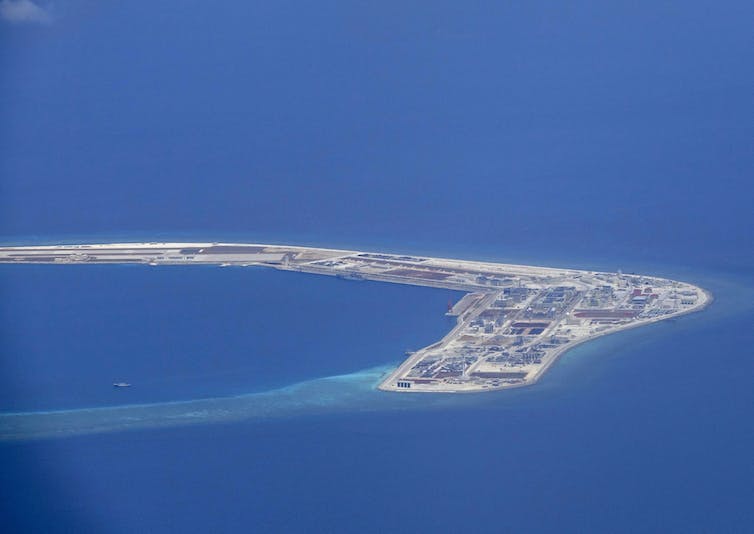 An aerial view of the Subi reef, one of the tiny islands being claimed by China in the disputed South China Sea. FRANCIS R. MALASIG/EPA

What is China’s claim based on

The South China Sea is a vast area measuring 3.6 million square kilometres, more than double the size of the Gulf of Mexico. It takes a modern warship just over three days to sail at top speed of 30 knots from its northern edge at Taiwan to the southern edge at the Strait of Malacca.

China’s claim to the sea is based both on the Law of the Sea Convention and its so-called “nine-dash” line. This line extends for 2,000 kilometers from the Chinese mainland, encompassing over half of the sea.

In a historic decision in 2016, an international tribunal in The Hague ruled against part of China’s claims to the sea in a case brought by the Philippines. China rejected the authority of the tribunal and its finding in the case.

In its ruling, the tribunal considered the South China Sea to be a “semi-enclosed sea” as defined by the Law of the Sea Convention — a body of water tightly or largely contained by land features.

This status carries with it the expectation that coastal states should cooperate on everything from conservation issues to commercial exploitation. This concept is important: it means that by definition, the South China Sea is a shared maritime space.

How does international law factor in?

Under the Law of the Sea Convention, all states have a right to 200 nautical mile “exclusive economic zone” to exploit the resources of the sea and seabed, as measured from their land territories. Where these zones overlap, countries are obliged to negotiate with other claimants.

This has yet to happen in the South China Sea, which is the source of many of the current tensions. There are three great challenges to this.

The first is the countries claiming parts of the South China Sea cannot agree who owns the Paracel and Spratly islands.

China asserts its sovereignty based on highly disputable evidence from ancient times, as well as more recent claims from 1902-39. Japan occupied the islands during the second world war and later recognised the claim of the Republic of China (now Taiwan) in a 1952 peace treaty.

Rival claimants to the islands deny the validity of this evidence. Vietnam has equally credible evidence from the period before and during the second world war.

Then there is the broader question of China’s larger claim to the waters within the u-shaped “nine-dash” line. This line, which skirts the Philippines, Malaysia, Indonesia, Brunei and Vietnam, was first drawn by the Nationalist government of China in 1947. The claim had no basis in international law — then, or now.

A second challenge is one of the actors in this conflict is Taiwan, which has been in dispute with China over sovereignty issues since 1949.

This dispute has meant Taiwan is not formally recognised as a state by most countries and is therefore not a signatory to the Law of the Sea Convention, nor legally entitled to claim territory. But Taiwan occupies one of the islands.

Third, there is a debate in international law about the type of land territory that can generate rights to an exclusive economic zone. The Law of the Sea Convention mandates the land must be able to sustain human habitation. And in 2016, the international tribunal in The Hague found no islands in the Spratly group met this criterion.

This was a major blow to China’s claims to resource jurisdiction all the way to the southern limits of the South China Sea.

Competing views on freedom of navigation

While the convention settled most international laws governing the sea, it left unresolved some issues related to military activities, especially “innocent passage” by warships in territorial seas.

Under the Law of the Sea Convention, a foreign warship can pass within the 12 nautical miles of another state as long as it takes a direct route and doesn’t conduct military operations.

But states disagree on what constitutes innocent passage. Maritime powers like the US, UK and Australia routinely conduct freedom of navigation operations (or FONOPs) to challenge what Washington calls attempts by coastal states to unlawfully restrict access to the seas.

The US has angered China by carrying out FONOPs within 12 nautical miles of the islands it claims in the South China Sea. These operations are not designed to challenge China’s claims to islands or resource zones. Rather, the purpose is to assert US rights to freedom of navigation.

China opposes the transits for several reasons, including its assertion that naval ships should not “operate” in other countries’ exclusive economic zones.

Beijing, however, ignores the contradiction between this position and its own activities in the sea, where its naval ships regularly operate in the claimed EEZs of other states.

For their part, the smaller states of the South China Sea are ambivalent about the dispute. They are certainly opposed to what they see as bullying from China on excessive maritime claims and would like to deny all its island claims.

But they are also not keen on seeing the US go too far in its policy of intensifying military confrontation with China. 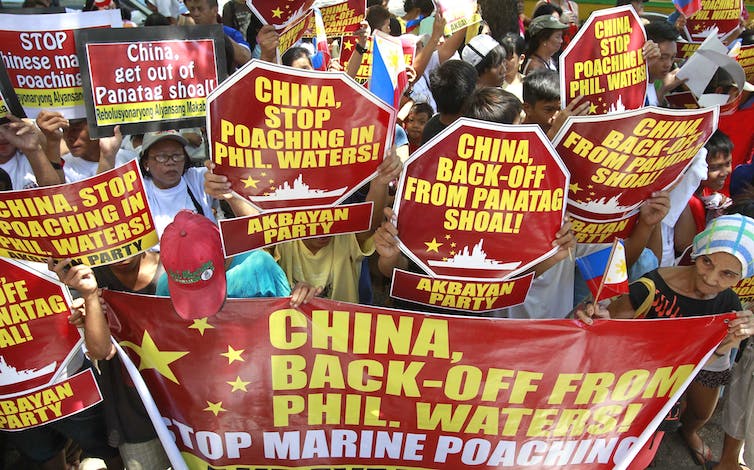 The Philippines has been among the more vocal countries against Chinese expansion in the South China Sea. Bullit Marquez/AP

Will Australia draw closer to the US position?

Australia’s statement on the South China Sea last week was its strongest rejection yet of China’s claims to the waters.

It did not represent a new position on the legal issues, but marked a fresh determination to confront China over its unreasonable claims and its bullying behaviour in the maritime disputes.

Australia has not been keen on following the high-profile freedom of navigation operations of the US — concerned it might provoke a response from China — but that position may be about to change.