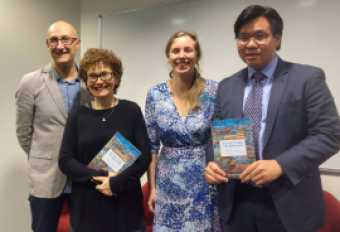 Not long ago a senior officer from a foreign military body wrote to Dr Peter Balint to thank him for his work on dealing with insurgents. The officer’s eyes had been opened, he said, to the fact that dealing with the problem was not so much about fighting and killing the insurgents and was more about helping the communities that produced them. It was around fighting poverty rather than fighting people.

Balint studies ‘toleration’, or the way different ways of life can be taken seriously in order for everybody to live together successfully. It’s as relevant historically (Catholics vs Protestants) as it is currently (same-sex marriage).

His book, Respecting Toleration: Traditional Liberalism and Contemporary Diversity, has been discussed around the globe. Balint himself has presented papers at academic seminars in Australia, Canada and the US. At the University of Melbourne there was a panel discussion of the book, and he has attended symposia on his book in London, Manchester and Amsterdam.

He has published pieces in academic journals, written chapters for other books and has consulted to the Australian government on the topic of the skilled migration program. Balint was recently invited to Parliament House to discuss, in a private meeting with Senators, the issue of citizenship-stripping of potential terrorists.

Balint has been interviewed by ABC Radio, published by Fairfax Media, and his book was discussed during a public seminar panel by the Australian Human Rights Commission’s Race Discrimination Commissioner. His work has real effects and powerful meaning in an increasingly globalised but fractured world.