The future of international law 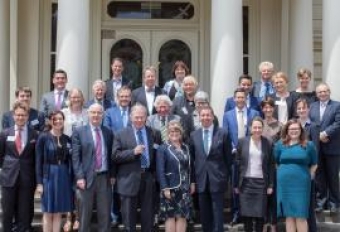 During a recent international law conference in Wellington, Professor Shirley Scott found herself amongst many of the world’s greatest legal minds. There was the only Australian judge currently on the international Court of Justice, as well as a recently retired NZ judge. There were key people from the New Zealand Foreign Ministry and several top international lawyers from around the globe.

“We were looking at the future of international law as the distribution of world power shifts,” Scott says. “I was invited so that I could look at the big picture of geopolitics and link it to legal trends.”

A few weeks earlier she appeared before an Australian Senate Inquiry to help policy makers understand the impact of climate change on Australian security. Prior to that she facilitated UNSW Canberra’s hosting of a travelling exhibition from the EU which had, as its theme, climate security. She is now serving as an expert on the Rules-based International Order as part of the EU-Australia Sectoral Dialogue.

With a focus on the politics of international law, Scott’s research has covered various specialisations, including developments in the South China Sea and the impact of the relative decline of the US on the international legal system. All have had excellent results in terms of engagement.

Scott has published 10 books, penned 30 book chapters, published 50 journal articles and presented numerous conference papers. A member of the Advisory Council of the Asian Society of International Law, she has been a key player in organising some of the most significant gatherings of international lawyers in our region.