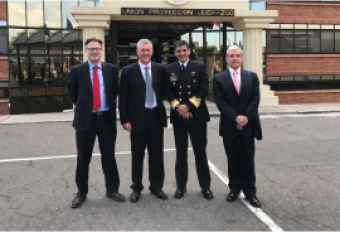 Dr Deane-Peter Baker has been working in the area of military ethics for the last decade.
“Some of my early work was on ethical questions around private military and security companies,” Baker says. “More recently I've been focussing on special operations ethics as well as some work on the ethics of autonomous weapons.”
“There is evidence that training in military ethics does impact battlefield behaviour and potentially leads to fewer unnecessary deaths. So a big focus for me is spreading the word.”
Baker has run a massive open online course (MOOC), a seven-week course called ‘Military Ethics: An Introduction’ that included papers, a book written for the course and numerous video modules. More than 20,000 people have now completed that course.
“I've certainly not taught that many people in my normal academic career!” he says.
Baker is also on a panel of experts known as the International Panel for the Regulation of Autonomous Weapons, an independent body funded by the German government. On the local front, Baker has been granted access to Australia’s Special Operations Command, for whom he has conducted an annual ethics briefing for new soldiers.
“So much of the burden of actual combat operations falls on them,” Baker says, “so it's particularly important that they are well prepared to make decisions in that context.”