It's not too late to save them: 5 ways to improve the government's plan to protect threatened wildlife

It comes as Australia’s list of threatened species continues to grow. Relatively recent extinctions, such as the Christmas Island forest skink, Bramble Cay melomys and smooth handfish, add to an already heavy toll. 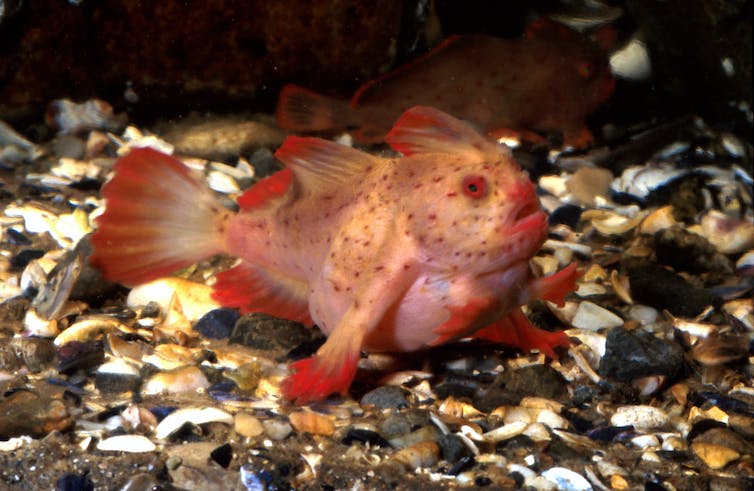 Now, more than ever, Australia’s remarkable species and environments need strong and effective policies to strengthen their protection and boost their recovery.

So as we settle into the new year, let’s reflect on what’s worked and what must urgently be improved upon, to turn around Australia’s extinction crisis.

Read more: Let there be no doubt: blame for our failing environment laws lies squarely at the feet of government

How effective was the first Threatened Species Strategy?

The Threatened Species Strategy is a key guiding document for biodiversity conservation at the national level. It identifies 70 priority species for conservation, made up of 20 birds, 20 mammals and 30 plants, such as the plains-wanderer, malleefowl, eastern quoll, greater bilby, black grevillea and Kakadu hibiscus.

These were considered among the most urgent in need of assistance of the more than 1,800 threatened species in Australia.

The strategy also identifies targets such as numbers of feral cats to be culled, and partnerships across industry, academia and government key to making the strategy successful.

The original strategy (2015-20) was eagerly welcomed for putting the national spotlight on threatened species conservation. It has certainly helped raise awareness of its priority species.

However, there’s little evidence the strategy has had a significant impact on threatened species conservation to date.

The midterm report in 2019 found only 35% of the priority species (14 in total) had improving trajectories compared to before the strategy (pre-2015). This number included six species — such as the brush-tailed rabbit-rat and western ringtail possum — that were still declining, but just at a slower rate.

Threatened Species Index trends for mammals (left) and birds (right) from 2000 to 2017. The index and y axes show the average change in populations (not actual population numbers) through time. The Theatened Species Recovery Hub, Author provided

On average, the trends of threatened mammal and bird populations across Australia are not increasing.

Other targets, such as killing two million feral cats by 2020, were not explicitly linked to measurable conservation outcomes, such as an increase in populations of threatened native animals. Because of this, it’s difficult to judge their success.

What needs to change?

The previous strategy focused very heavily on feral cats as a threat and less so on other important and potentially compounding threats, particularly habitat destruction and degradation. 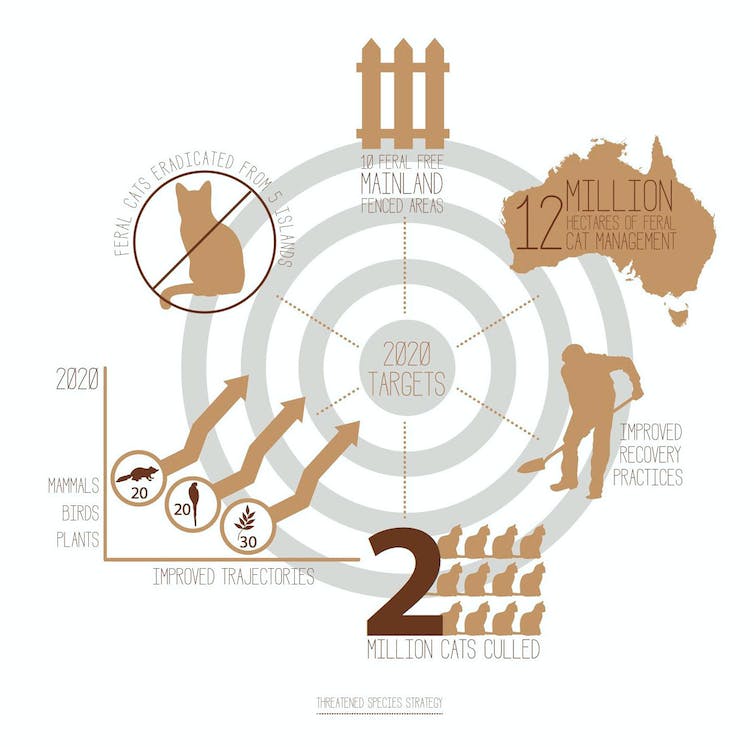 Targets from the first Threatened Species Strategy. Department of Agriculture, Water and the Environment

For instance, land clearing has contributed to a similar number of extinctions in Australia (62 species) as introduced animals such as feral cats (64).

In fact, 2018 research found agricultural activities affect at least 73% of invertebrates, 82% of birds, 69% of amphibians and 73% of mammals listed as threatened in Australia. Urban development and climate change threaten up to 33% and 56% of threatened species, respectively.

Other important threats to native Australian species include pollution, feral herbivores (such as horses and goats), very frequent or hot bushfires and weeds. Buffel grass was recently identified as a major emerging threat to Australia’s biodiversity, with the risk being as high as the threat posed by cats and foxes.

We made a submission to the Morrison government when the Threatened Species Strategy was under review. Below, we detail our key recommendations.

1. A holistic and evidence-based approach encompassing the full range of threats

This includes reducing rates of land clearing — a major and ongoing issue, but largely overlooked in the previous strategy. 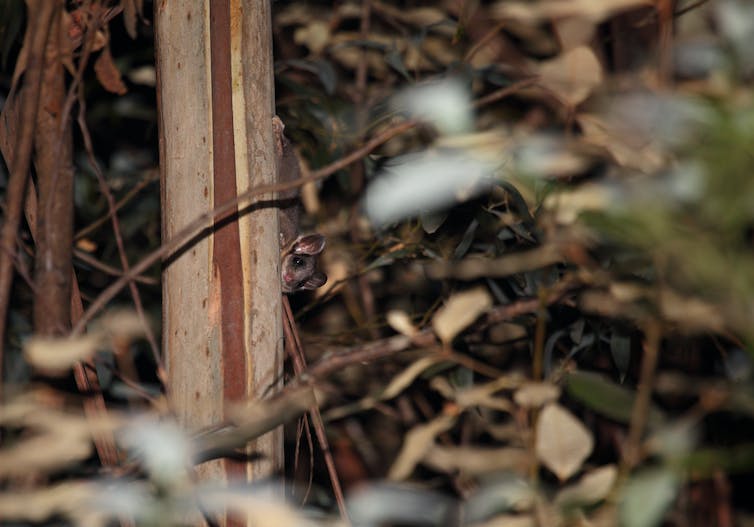 Leadbeater’s possums are critically endangered. Their biggest threat is the destruction of hollow-bearing trees. Shutterstock

The previous strategy focused heavily on a small subset of the more than 1,800 threatened species and ecosystems in Australia. It mostly disregarded frog, reptile, fish and invertebrate species also threatened with extinction.

To reduce bias towards primarily “charismatic” species, the federal government should use an evidence-based prioritisation approach, known as “decision science”, like they do in New South Wales, New Zealand and Canada. This would ensure funds are spent on the most feasible and beneficial recovery efforts.

Some targets in the first Threatened Species Strategy were difficult to measure, not explicitly linked to conservation outcomes, or weak. Targets need to be more specific. 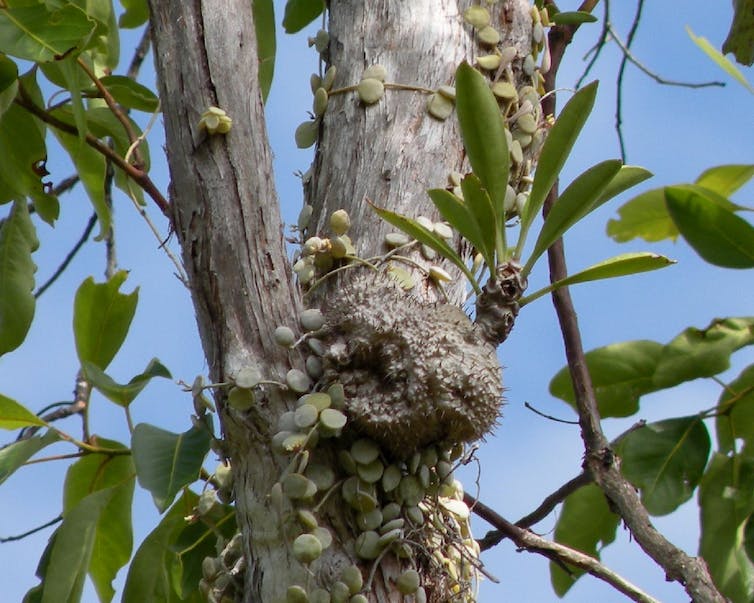 The ant plant (Myrmecodia beccarii) is one of the 30 plants on the federal government’s list of priority species. It is an ‘epiphyte’ (grows on other plants), and is threatened by habitat loss, invasive weeds, and removal by plant and butterfly collectors. Dave Kimble/Wikimedia, CC BY-SA

Investing in conservation reduces biodiversity loss. A 2019 study found Australia’s listed threatened species could be recovered for about A$1.7 billion per year. This money could be raised by removing harmful subsidies that directly threaten biodiversity, such as those to industries emitting large volumes of greenhouse gases.

The first strategy featured a call for co-investment from industry. But this failed to attract much private sector interest, meaning many important projects aimed at conserving species did not proceed.

The Threatened Species Strategy should be aligned with Australia’s international obligations such as the United Nation’s Sustainable Development Goals and the federal Environment Protection and Biodiversity Conservation Act 1999 (which is also currently being reviewed). This will help foster a more coherent and efficient national approach to threatened species conservation. 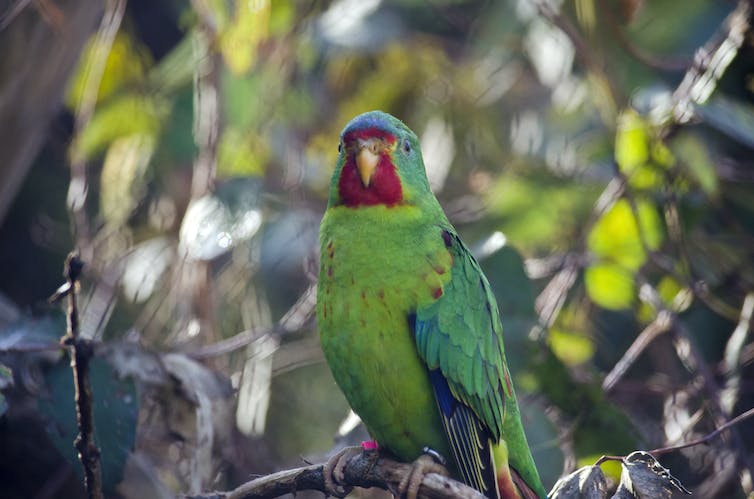 The biggest threat to the critically endangered swift parrot is the clearing of their foraging and breeding habitat. Shutterstock

There are also incredible opportunities to better align threatened species conservation with policies and investment in climate change mitigation and sustainable agriculture.

The benefits of investing heavily in wildlife reach beyond preventing extinctions. It would generate many jobs, including in regional and Indigenous communities.

Protecting our natural heritage is an investment, not a cost. Now is the time to seize this opportunity.