Until the end of the 1980s, the major focus of research in East Asian Studies was Japanese and Chinese Studies, with sporadic but limited research being undertaken on Korean studies. Korean Studies in Australia and New Zealand gained momentum from the late 1980s and universities and high schools have revised their curricula to reflect the change by providing an increasing number of subjects exploring Korean Studies.

The Korea Research Institute at the University of New South Wales (KRI@UNSW) began as the Korea-Australasia Research Centre (KAREC) in June 2000. Its major aims included establishing cooperative research networks among scholars in Korean studies and Korea related research, conducting research projects on important public policy issues in the region, and contributing to policy formation in the related areas.

In 2003, KRI@UNSW played a driving role in establishing the Korean Studies Association of Southeast Asia (KoSASA) which now has extended to eight top-tier universities in Southeast Asia and numerous government and non-government organisations.

In 2006, KRI@UNSW was selected by The Korean Ministry of Education and the Academy of Korean Studies (AKS) to become the leading research and education hub for Korean studies in Australasia and Southeast Asia, after being officially endorsed by the Korean government. In 2010, KAREC has become the Korea Research Institute (KRI@UNSW).

In 2011 and also in 2015, KRI@UNSW was selected by the Academy of Korean Studies (AKS) to conduct ‘Laboratory Program for Korean Studies’ projects. This is the most competitive and academically rigorous funding scheme provided by the AKS to a small number of research institutes globally. KRI@UNSW is the only institution to have received this grant fundig over two consecutive terms highlighting our success in advancing Korean Studies on a global scale.

In 2015, KRI@UNSW formed a strategic Universities-Government Intuitions Networks with the aim of conducting collaborative and comparative research on public policy in Southeast Asia, Australasia and Korea. The network aims to undertake ‘Comparative Public Policy Research’ (CPPR) under the coordination of KRI@UNSW. The CPPR Forum consists of research partners from Korea, Australia and eight South East Asian countries’ universities and government research institutes. 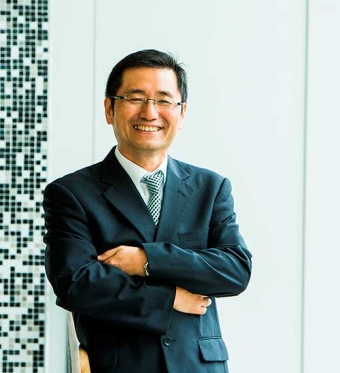 The achievements of KRI@UNSW delivered by the founding executive director, Professor Chung-Sok Suh from 2000. Professor Chung-Sok Suh’s passing on 25 August, 2015 due to ill health was a tragic loss for KRI@UNSW and the broader UNSW Australia community. The following extract from the International Review of Korean Studies (IROKS) reviews his career and the strong links and relationships he established within UNSW Australia, Australia, Korea and across eight Southeast Asian countries (Thailand, Malaysia, Indonesia, the Philippines, Vietnam, Laos, Cambodia and Myanmar) at professional and personal levels. In memory of this legacy, UNSW Australia awards a Professor Chung-Sok Suh Scholarship and the Korean Studies Association of Australasia introduced two types of awards under his name.

The following obituary is extracted from the International Review of Korean Studies, Volume 13, Number 1, 2016 with permission from the Editor-in-Chief in memory of the late Professor Chung-Sok Suh.

On the 25th of August 2015, Professor Chung-Sok Suh passed away unexpectedly. The community of scholars that contributes to the International Review of Korean Studies (IROKS) deeply mourns the sudden passing of Professor Suh who had been its Editor-in-Chief since 2004. Professor Suh was an outstanding scholar and a visionary leader in the disciplines of International Business and Korean Studies. Many will remember him as a valued colleague, leader, and friend. His tireless work and dedication in promoting Korean studies in Australia and Southeast Asia elevated the profile of UNSW Australia as one of the world’s leading research hubs for Korean studies.

Professor Suh began his career as a lecturer in Economics at UNSW Australia in 1989 and he later joined the School of International Business (currently the School of Management) in 1998. He was a highly respected member of the School of Management. Serving in various capacities at UNSW, he played an important role in expanding the profile of the university. He contributed over 70 publications in highly-regarded journals, books, and conference proceedings, dealing with the topics including Asian economic development models, internationalization strategy, processes of multinational enterprises, foreign direct investment of East Asian economies, government-business relations, and international trade. The foundation of knowledge advanced by Professor Suh will continue to be of significant importance to economic policy formation. Under his associate/headship during 2003-2005, the former School of International Business grew to become one of the leading schools in International Business across Australia. He was also an outstanding and passionate teacher who was highly valued and respected by both his students and colleagues. He previously held a lectureship at the University of Wollongong and held a visiting professorship at several reputable institutions such as Seoul National University, National University of Singapore, University of California at San Diego, and Australian National University.

Professor Suh was particularly instrumental in promoting Korean studies across Australia, New Zealand, and Southeast Asia. Owing to his tireless work and drive, Korean studies has gained recognition as an important discipline in the region.

As Editor-in-Chief of the IROKS from 2004 until his death in 2015, he raised the reputation of this new journal, which publishes important research on topics such as Korean language, literature, history, political science, business and management, economics, and other humanities and social sciences. The journal was recognized as a category “B” journal by the Australian Research Council in their ERA ranking in 2009. He also served on the editorial boards of the International Economics and Finance Journal and the Journal of East Asian Economies.

In 2000, Professor Suh established the Korea-Australasia Research Centre (KAREC) which was later expanded to become the Korea Research Institute (KRI@UNSW). Under his leadership as Executive Director, the institute became a world-class research hub for Korean studies. From its inception, the institute fostered cooperative research networks among scholars in Korean studies and Korea-related research. The institute conducted significant research projects on important issues in the region, and contributed to policy formation in critical areas. Professor Suh’s vision and dedication to KRI was made evident when it was officially recognized by the Korean government as one of four international institutions for Korean studies, along with UCLA, University of London, and University of Washington.

Professor Suh also played a pivotal role in establishing and developing two leading regional conferences on Korean studies. During his two-term service as President of the Korean Studies Association of Australasia (KSAA) (1998-2000 and 2009-2011), Professor Suh stimulated scholarly interest in Korean studies by facilitating communication between academics and creating various programs for Korean studies in the region. He established the Korean Studies Association of Southeast Asia (KoSASA) in 2005, along with leading national universities from eight Southeast Asian countries: Thailand, Malaysia, Indonesia, the Philippines, Vietnam, Laos, Cambodia, and Myanmar. As a member of its Advisory Board and Chairman of its Executive Management Committee, he demonstrated outstanding leadership for the Association which now holds one of the leading conferences on Korean studies in the region. The KoSASA has not only been instrumental in promoting Korean studies in Southeast Asia, but has also been increasingly recognized as an important community of Korean studies scholars around the world.

Through his involvement in the KRI and the Associations, he organized and led various workshops and symposia aimed at providing policy recommendations for governments and their agencies in Korea, Australia, and Southeast Asia.  The issues addressed at these forums included reforms in Southeast Asia, multiculturalism in Australia/Korea, language education, and international education and research collaboration. Professor Suh became a conduit through which the government of Korea could connect to those of countries in Southeast Asia. A notable scholarly contribution made by Professor Suh was his development of an infrastructure for comparative research by connecting university networks with government networks throughout Korea, Southeast Asia, and Australia.

On a personal note, I first met Professor Suh 17 years ago when I commenced my PhD program in July 1998 in the newly launched School of International Business at UNSW. Back then, Professor Suh was a new faculty member in the school. I feel very privileged to have benefited from his generosity and collegiality over the years. He was always generous with his time, sharing his knowledge and expertise in research and teaching with me (which sometimes included sharing his own lecture notes). He was a very caring person who was always willing to give a helping hand to colleagues and students in need. I still vividly remember the first yumcha lunch (the first of many) he took me to, along with some other Korean studies scholars, years ago – What a strong sense of solidarity all of us felt! Recently in the New Year, I paid a visit to his resting place here in Sydney to reflect on his life and the contributions he made to the wider community as a scholar, leader, and as a person. Almost five months have passed since his passing, but I can still picture him walking hurriedly around the school and the university, with his tiny bag in his hand. I will cherish the fond memories I was privileged to share with him over all those years.

All those who knew him will be deeply saddened by this news. We will all miss Professor Chung-Sok Suh as a valued colleague, leader, and dear friend of ours for many years to come.