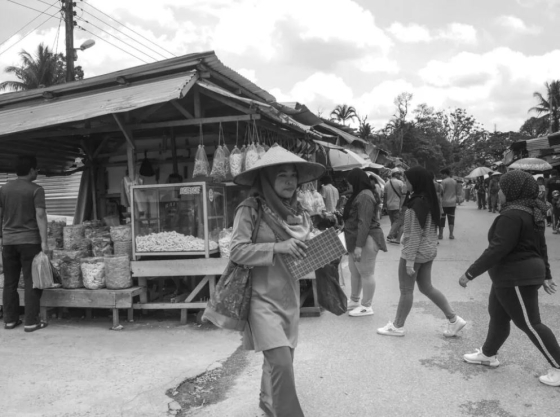 Tourist villages provide opportunities for women to earn money for their family and the local community without leaving their home.

Women sending money back to their family have been hailed as heroes for boosting Indonesia’s foreign exchange. But reports of abuse by overseas employers persist. The execution of two Indonesian maids in Saudi Arabia led to a total ban on sending women as domestic workers to 21 countries (mostly in the Middle East) in 2015. But as recently as July 2022 a temporary ban was instituted against sending Indonesian housemaids to Malaysia.

In Indonesia’s agricultural sector, rural women earn less than men and patriarchy is perpetuated. While women are actively involved in agricultural production such as weeding and harvesting, they lack the physical strength to clear land and plough. Women undertake more unpaid household work including food preparation and daily chores and they take care of livestock.  Indonesia’s desa wisata, or tourism village programme, is emerging as an alternative where rural women can choose to generate an income.

The tourist-popular Banyuwangi Regency of East Java Province is home to people with some of the lowest minimum monthly wages (1,7 million rupiah or about US$117per month) in the region. But it is also known as the centre of Osing traditional culture, an indigenous ethnic group, where a wide range of festivals coupled with dance and music are preserved and promoted as cultural attractions for tourists. The area offers tranquil rice field views with a variety of choices of culinary traditions, including aromatic coffee.

Desa wisata can help alleviate poverty by promoting homestays as a way for visitors to have an authentic experience based on the traditional character of the destination. In 2022 the village will run 99 festivals, with an app developed by the government for potential visitors to browse what’s on offer. Using the app, tourists can book their homestay accommodation and order local traditional food from Banyuwangi. Under the government’s Smart Kampung (village) programme, villagers can participate in a digital economy platform to fulfil food orders.

Moreover, research increasingly shows that the growth of household income brings additional benefits for families: delaying child marriage, increased spending on children’s education, and a reduction in gender-based violence.  All of which help to foster gender equality.The vast majority (85 percent) of urban digital gig economy beneficiaries in Indonesia in 2021 were men, according to World Bank data. But in the case of desa wisata, women can also experience the benefit of the smart kampung programme, sharing in the opportunity to start a new business.

The resulting rise of their earnings can contribute to the wellbeing of their family, and gradually women’s voices are likely to be better recognised in decision-making in rural development policies.

Ajie Saksono obtained his PhD in Southeast Asian Social Inquiry at UNSW and now is seconded as the Head of Governance, Social and Culture Division at the Gunung Kidul Regional Planning Agency, Yogyakarta Special Province, Indonesia.  His research focuses on state-led rural development policies in Indonesia. Both authors declared that they have no conflict of interest.

The research was undertaken with financial assistance from UNSW Canberra Australia and LPDP Indonesia.

This article is republished from 360info under a Creative Commons license. Read the original article.