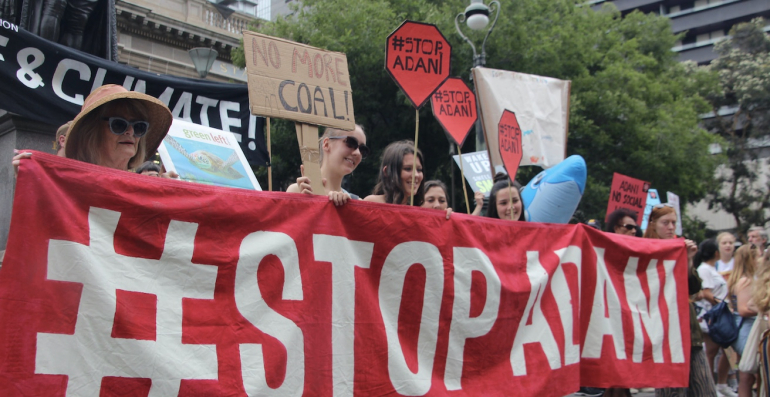 The Adani coal mine has seen significant opposition in Australia. This resistance to what India sees as an essential project to help secure its energy future may have a lasting impact on Australia-India relations.

Despite the Stop Adani campaign, India’s energy and infrastructure giant is on the verge of breaking ground in Queensland’s Galilee Basin. Since its inception in 2011, the Adani Carmichael mining project has become one of Australia’s most debated and controversial business ventures. It has also become an issue that may impact Australia’s future economic relationship with India – the world’s fastest-growing major economy and potentially the most significant business destination for Australia in the coming decades.

Advancing Australia-India relations: economic ties not up to the mark

Over the past decade and a half, the Australia-India relationship has steadily progressed despite its ups and downs. For a time, the relationship wavered after Australia chose not to sell uranium to India. But, after Australia’s initial flip-flopping, a civil nuclear deal was sealed with India in 2015 and the first consignment of Australian uranium was shipped in 2017. In a positive move, the Australia-India relationship has now been elevated to a strategic partnership with high-level interactions between both countries’ respective defence and security branches. In a further sign of growing trust in 2014, Narendra Modi was the first Indian prime minister to visit Australia in almost three decades. The nuclear deal, the bilateral dialogue and visits from high-level officials are all signs the relationship is moving forward.

The relationship also has a common bond in Australia and India’s shared Commonwealth legacy. This has contributed to strong people-to-people links through the growing Indian diaspora in Australia and through common ties such as cricket. There is now a growing convergence of strategic and security challenges in the Indo-Pacific region with the growing military assertiveness of China and US reluctance to act as the sole security provider. These factors and India’s deepening strategic partnership with the United States and its Western allies are all further stimulus for strengthening Australia-India ties.

The place of coal in India’s energy portfolio

It is important to consider India’s vast energy needs and how its coal dependency fits into its broader energy portfolio. Coal is used mainly for the generation of electricity and accounts for 55 percent of India’s energy mix. India has some of the world’s largest coal deposits and is the second largest producer of coal after China. But its coal production is not sufficient to meet its needs.

Despite this, the Modi government has previously vowed to stop importing coal to generate electricity. But this does not stack up. India’s abundance of thermal coal is of very poor quality. Its coal sector is weighed down by major inefficiencies, productivity stagnation and obsolete technology, and environmental issues caused by excessive pollution and ash-handling pose further constraints. If India only uses domestic coal for electricity generation, this will be more environmentally damaging because of higher carbon emissions.

In 2015, Prime Minister Modi committed to reducing carbon emissions under the Paris Climate Agreement. Since then, India has actively pursued a less carbon-intensive energy policy by transitioning towards gas, renewables and nuclear power. However, there is currently only so much it can do.

India lacks the means to produce dispatchable baseline power without coal. It is not endowed with large reserves of gas or uranium. It has to import enriched uranium for its nuclear power and it faces difficulties accessing the necessary technology and fuel for its reactors in global markets. In addition to the opposition it saw from Australia in the past, its nuclear power sector has been constrained by China’s opposition to its membership of the Nuclear Suppliers Group. Its attempts to expand its hydroelectric power supply have also been met with significant domestic opposition. Groups such as the Save Narmada Movement have opposed the displacement of citizens in order to build dams. It has embarked on ambitious solar and wind development with excellent progress. But without a major breakthrough in affordable and scalable energy storage technology, India has no option but to rely on coal for its baseload power. And this will continue to be the case for longer than other countries who have natural gas reserves or access to a fully developed nuclear power sector and reliable access to uranium.

In recent years, India’s coal policy has focused on quality over quantity. This is evident in its coal import trends. Coal imports in 2016 show a drop in imports from Indonesia and a shift to South Africa, Colombia and Russia, which have relatively better-quality coal. Given its preference for quality, Australian coal – which emits less carbon and is of a higher calorific value – is preferable. A reliable supply of such coal has the capacity to provide electricity to more than 100 million homes. Adani’s persistence with its coal project in Australia needs to be seen in this context.

Adani’s investment of $3.2 billion in its mine and port is the largest investment by an Indian corporate group in Australia. It has been pursuing this project for the past eight years and has complied with the stringent environmental conditions imposed by the regulators. Despite this, the project has faced immense opposition from activists and become a political football in Australian politics. This is unlikely to give comfort to potential Indian investors in Australia who perceive, rightly or wrongly, that the goal posts for Adani have been moved with every political twist. This has become an issue of trust and fairness among potential Indian investors in Australia and there is an impression among Indian businesses that they may not be treated fairly.

In a report authored for the Australian government in 2018, Peter Varghese points out business space including the energy market in India will be overcrowded in coming years. Indeed, this is already becoming the case: countries such as South Africa have been supplying the shortfall of quality coal to India and the United States is now eyeing the lucrative market. But it is Indian investment in other sectors which have the potential to create jobs in Australia – such as agri-businesses, the automotive industry and infrastructure – that may be impacted. Other developed economies such as the United States, France, Germany, Japan and Israel are already entering India in a range of sectors to compete with Australia.

It is also important to understand global warming is a big issue in India and the government is making serious efforts in this direction. To reduce dependence on fossil fuels, the Indian government has an ambitious plan to increase India’s installed capacity of renewable energy to overtake coal. It is ahead of schedule in achieving its ambitious target of reaching 175GW of installed renewable capacity by the year 2022.  No wonder Prime Minister Modi was awarded the United Nations highest environmental honour, the Champion of the Earth in 2018. And Adani is equally supportive of India’s commitment towards the Paris Climate Agreement. In fact, very few people in Australia know that Adani has built one of the biggest solar plants in the world in the Indian state of Tamil Nadu and has also completed a solar project in Australia. Importing quality coal is only a small component of Adani’s business plans and successful progression of their project may see more investment in Australia’s agribusiness, resource and infrastructure sectors.

As a democracy, the Indian government is unlikely to take an aggressive stance in supporting its private enterprises abroad. This may reduce the urgency for Canberra to address the Adani issue, but it could ultimately be a lost opportunity for Australia.

Dr Ashok Sharma is visiting fellow at UNSW Canberra at the Australian Defence Force Academy and adjunct associate professor at the Institute for Governance and Policy Analysis at the University of Canberra. He is deputy chair of the New Zealand Institute of International Affairs, Auckland.