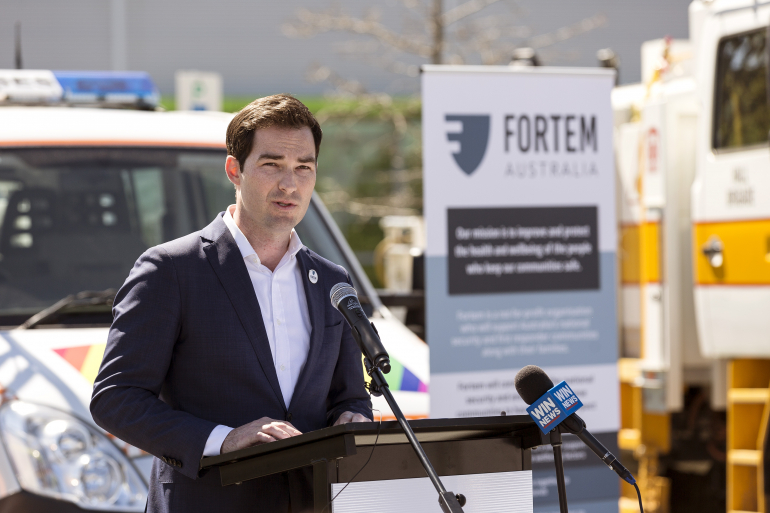 In recognition of Mental Health Week, we sat down with a UNSW Canberra graduate who has made outstanding contributions to the mental fitness of members of the Australian Defence Force, veterans and first responders. Co-founder of Soldier On and Fortem, John Bale, describes what inspired him create two charities and how UNSW Canberra helped set him on the path for success.

I did a Bachelor of Arts with Honours majoring in History, and then I came back and did a Master of Arts in Strategy and Policy and a Master of Management Studies in Project Management. It really put me in a place to think more critically, to understand where I was in the world and then to have some skill sets have been very useful through my career.

What are your favourite memories of your time at UNSW Canberra?

I think the biggest thing for me is actually the people who I went through university with. I'm still in contact with a lot of them and I work closely with a lot of them. The university staff were also just incredible. They really tapped into a love of learning that I didn't know I had – to want to actively to learn outside of the classroom, and I've continued that for the rest of my life. I love reading, I Iove learning and I don't think that I would have had that if I didn't have those teachers.

What inspired the creation of Soldier On?

My wife and I set it up with a good friend back in 2012. It came out of the personal loss of a good mate who was killed. He was also in my year at ADFA and Duntroon.

After he was killed in 2008 in Afghanistan, we recognised that his family got this incredible support, but there were others who were wounded in the same incident and no one in the community really understood how they could be supported.

My wife is a clinical psychologist and she recognised there were gaps that only a community organisation could fill. We thought we could connect the communities of those who have been wounded and then provide tangible resources for them.

As we grew the programs, we also recognised that we could support everyone in providing better preventative mental health.

What made you decide to create your second organisation, Fortem?

Through the process of building Soldier On, we recognised that there are so many organisations and individuals within them that sacrifice both their physical health and mental health.

Having a number of friends who had transitioned from the military into becoming either paramedics or police officers, we also recognised that there was an entire group that didn't have the same support from the community as veterans did. We saw that there was a really significant gap.

We provide social connection support, as well as psychological support, and now a transition and employment program to really help first responders and their families.

Why are organisations such as Soldier On and Fortem so important in the mental health space?

Within organisations, such as the ADF or first responder agencies, there are number of services for mental health. But often, these services are not heavily utilised and when they are used, it’s usually because the person is at a point where their mental health has deteriorated significantly.

Having a community-based organisation that can connect individuals and families together, allows people to protect their own mental health and provide that resilience. That preventative side is only really built when you build a community.

Community organisations, like Fortem and Soldier On, can really augment what big organisations like the Department of Defence, Veterans Affairs and first responder agencies currently do.

What have you learnt about mental health through these organisations?

I think we need to change the lexicon and talk not just about mental health, but also mental fitness.

People don't look at mental health the same way they do it as physical health. With physical health we try to keep ourselves relatively fit. We do that because we know if we don’t, we have a higher risk of injury and once we’re injured it takes longer to recover. The exact same thing is true when it comes to mental health.

How can people support these organisations and mental health more broadly?

If you’re a first responder, member of the ADF or a veteran, access these services. We recognise the importance of those preventative factors, so please don’t leave it to a point where you need more support. You can get in there now and use these services because they’re free and they genuinely help you.

Organisation can support veterans and first responders directly. If you're a big company or organisation, recognise the skill sets of first responders and veterans. They make great employees – this is not charity, it is actually a good business decision.

Individuals can also support Soldier On and Fortem as these organisations are predominantly funded and supported by the community. They do a range of activities, and they need volunteers. They also need people to fund them so that we can continue to provide these community-based resources.

Find out more about mental fitness.