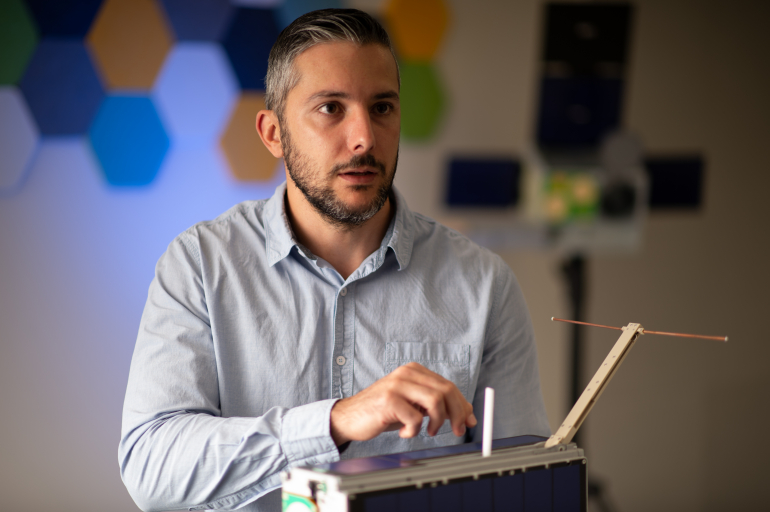 For Mr Tomaschett, the M2 mission is a unique opportunity to be at the forefront of space technological innovation.

After all, it is not very often the opportunity to lead the design, development, and operations of spacecraft from beginning to end appears; particularly with a team that has expertise in software, electronics, mechanical and optical design, thermal simulations and operations.

“I have a very challenging but fulfilling role here,” Mr Tomaschett said.

“I coordinate the flight team, a specialised group of engineers, and liaise with our customers and academics to bring the whole mission together. From the design, the development, the testing, right through to the operations. I'm the project lead for the on-ground development, but also the mission manager for overseeing the delivery of the on-orbit mission for the Royal Australian Air Force (RAAF).

“It's been very rewarding to be able to lead this capable team to work with a lot of different partners from collaborators to the manufacturers, and of course our customers. So it's been really, really good.”

For Mr Tomaschett, a love of machines and mechanisms began with LEGO blocks in childhood.

“That’s probably part of it, but I’ve always been interested in aircraft and space, so being able to bring all of that together – which is what I do here – really resonates with my interests.”

Mr Tomaschett has had an impressive career in the aerospace industry to date, working on major defence projects, like the F35 Joint Strike Fighter and the KC-30A Multi-Role Tanker at RAAF Base Amberley.

Since leaving Earth in late March, Australia’s most complex homegrown space mission to date signals an exciting next chapter in the country’s sovereign space capabilities, as the sector continues to expand, creating opportunities for job growth.

The M2 satellites were launched into space as one conjoined entity delivering world-leading CubeSat technologies, which will include formation flying at the separation of the two satellites on orbit.

International organisations will be watching with keen interest behind their space and earth-based surveillance systems to detect the satellites coming apart on orbit.

“This is a very important event, not just for Australia, but internationally,” Mr Tomaschett said.

“This will put to the test and contribute to the world’s capabilities for Space Domain Awareness. Separating these satellites on orbit is a first for our team, as is formation flying. So it is a very particular milestone for UNSW Canberra.”

The project, funded by the RAAF, is part three of a capability demonstration mission, with the information learnt from this mission to be used to raise the bar on Australia’s space technology and expertise, and further space education at UNSW Canberra.

“There is the main mission that we’ll deliver by the end of 2021. But we also have something that is unique here, where the M2 system is fully reprogrammable,” he said.

Mr Tomaschett explained the CubeSat technologies are jam-packed with different payloads, which is part of the reason why the craft and this mission is so complex.

“Beyond 2021 these spacecrafts will remain on orbit, meaning there’s extensive opportunities to reconfigure all the payloads and the spacecraft to undertake a range of mission objectives,” Mr Tomaschett said.

“To further the research conducted through UNSW Canberra we equally have interest to further develop our on-orbit AI capabilities for maritime surveillance.

It is an exciting time for Australia’s space sector as the industry draws from high school students going through the education streams to suppliers and manufacturers all working together to lift the country’s calibre as a competent global partner.

“To be able to make this possible, our team has reached out and created a supply chain of our own, we've attempted to keep this quite sovereign as well, using capabilities within Australia,” Mr Tomaschett said.

“Our partners, suppliers and manufacturers have all been a key part to this mission.”

Find out more about UNSW Canberra Space including how to study with us.

Find out more about the Department of Defence's new Space Division headquarters.