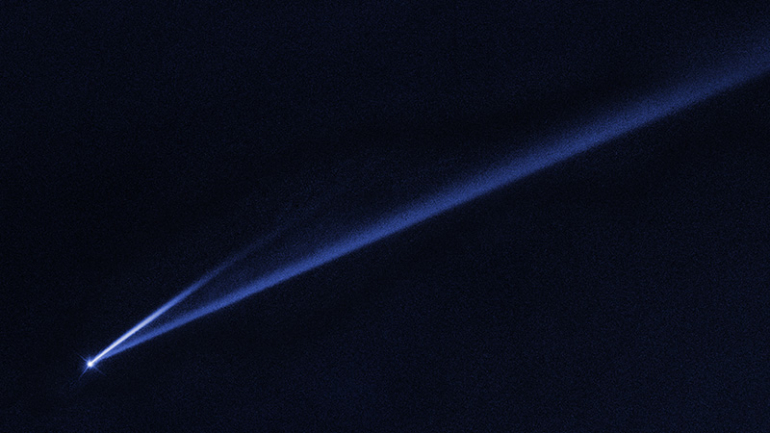 June 30 is World Asteroid Day, the official United Nations’ day of global awareness and education about asteroids. Originally co-founded by astrophysicist and famed musician Dr. Brian May of the rock group QUEEN; Apollo 9 Astronaut Rusty Schweickart; Filmmaker Grig Richters; and B612 President Danica Remy, the day promotes awareness and provides knowledge to the public about the importance of asteroids in our solar system history, and the role they play in our solar system today.

We spoke with UNSW Canberra astrophysicist Ashley Ruiter and learnt all about Asteroids.

Let’s start with the most obvious question, what is an asteroid?

An asteroid is a celestial body (a rocky object in space) that orbits the Sun. Most asteroids have peculiar/potato-like shapes, but the larger ones (like Ceres) are roughly spherical. Unlike comets, which originate from far outside of our solar system, asteroids formed closer to the Sun.

Where do asteroids come from?

Asteroids are left over rocky material from the time when our solar system formed about 4.5 billion years ago. Most asteroids are found in a region orbiting the Sun, between the orbital paths of Mars and Jupiter, called The Asteroid Belt. There are also many asteroids that share Jupiter’s orbit; these are called Trojan asteroids.

Are asteroids and meteors the same thing?

No, not exactly, though an asteroid can become a meteor. If an asteroid (or fragment of one - a meteoroid) were to end up close to Earth and enter our atmosphere, it would be called a meteor, and would heat up and appear to glow as it travels (meteors are sometimes called ‘shooting stars’, though they are not stars at all!). If the meteor reaches the planet’s surface before it burns up completely, it’s called a meteorite. We can learn something about asteroids, and thus the formation of our solar system, from studying meteorites. In short: asteroids are in orbit around the Sun, while meteors have entered Earth’s atmosphere.

Can you see an asteroid from Earth?

Well - this is very tough without a telescope! Asteroids are regularly captured by detectors during observing runs with various telescopes, for example the SkyMapper telescope located in NSW. In performing nightly surveys of the sky to search for supernovae or anything “transient”, certain images get flagged due to variability when comparing images that were taken several nights apart. For example: if a supernova is detected it would lead to a change in brightness between two images taken on different nights. There is an algorithm that detects this type of variability and flags the images so that they can be vetted by astronomers. In many instances the variability is caused by the passing of an asteroid! (but don’t worry - they usually aren’t very close). It is occasionally possible to see the brightest asteroid(s) by eye, if you know where to look and have dark, clear skies.

Have humans landed on an asteroid?

Humans themselves no - that’s only in the movies! Some asteroids have been orbited by spacecraft, and the NEAR Shoemaker spacecraft landed on the asteroid Eros nearly 20 years ago. There are a few more recent encounters between space probes and asteroids. For example, the NASA spacecraft OSIRIS-REx is currently visiting the asteroid Bennu, and is meant to collect samples and return them to Earth in 2023. The Japan Aerospace Exploration Agency (JAXA) explorer mission Hayabusa2 left the asteroid Ryugu in late 2019 and is meant to return samples from the asteroid in late 2020.

Did an asteroid kill off the dinosaurs?

It is widely believed that a meteor impact - either from an asteroid or a comet - was the beginning of the end for the dinosaurs. Various evidence supports the idea that a meteor struck Earth in the vicinity of the Yucatán Peninsula about 66 million years ago. This crater is known as the Chicxulub crater, and the impactor was believed to have been rather large (~10 - 80 km wide). The impact caused a mass extinction on the planet by triggering tidal waves, earthquakes, and wildfires as well as longer term effects due to dust and particulates blocking sunlight, impeding photosynthesis and disrupting the food chain. However, a newer study suggests that toxic gases from volcanic activity occurring over the same period of the impact may have been the main contributor in the dinosaurs’ death. More on that debate can be found here.