Beyond Villers-Bretonneux and the tale of the Little Digger 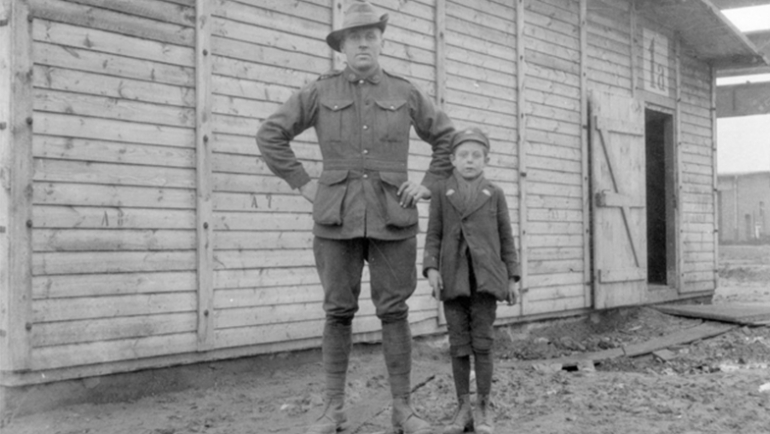 Each year we acknowledge and honour the Australia-France relationship that was forged on the Western Front during the First World War.

Many stories of friendship and camaraderie between the two allies emerged from the battlefield, but a favourite for historian Lewis Frederickson is the tale of French orphan, Henri Hermene Tovell.

Henri’s friendship with the Royal Australian Air Force’s No. 4 Squadron, particularly resonated with Wing Commander Frederickson, who is also the Chief of Air Force Fellow serving at UNSW Canberra.

Henri first met the Squadron on Christmas Day in 1918 when he walked into the Airmen’s Mess at the Bickenford air base in Germany.

He introduced himself as Honore, but the Australians couldn’t pronounce it and he became known to the troops as Henri or ‘Little Digger’.

“He didn’t know how old he was. He had been following the British formations around the Western Front for the duration of the war, attaching himself to particular units,” Dr Frederickson said.

“He spoke poor English and the Australians took him under their wing. Henri was particularly attached to an air mechanic, Tim Tovell, who had two daughters and a son. In Feb 1919, the squadron moved west back into France and they took the little boy with them.

“Tim found out, tragically, that his son in Australia had died in the flu epidemic. He took young Henri under his wing and decided that he was going to get him back to England, and hopefully Australia with him.” Henri is smuggled into England.

Henri was smuggled into England in an oat sack on Tim’s back, and on board the ship to Australia in a basket.

“It was very lucky that the Premier of Queensland was on board the vessel - he’d been in England overseeing repatriation,” Dr Frederickson said.

The Premier made contact with the Australian authorities, who granted permission for Henri to disembark in Australia. Upon their return, Henri was adopted by Tim and his wife, Gertrude. Henri and Tim with their family in Queensland.

The story has a sad ending – Henri died at the age of 21 in a motorcycle accident. However, the friendship the French orphan shared with the Australian mechanic continues to resonate with both nations.

“This isn’t an Australian idiom, or a particular type of behaviour, it’s indicative of most nations that find themselves in these tragic circumstances. In any war, individuals in these circumstances will often look to do what they see as the humane or right thing,” Dr Frederickson said.

Beyond Villers-Bretonneux, a conference hosted this week by UNSW Canberra, will explore the French-Australian relationship since the Great War. Dr Frederickson will discuss the story of ‘the Little Digger’ and why it still resonates in 2019.

“Anzac Day 1918 was the Australian contribution to the battle of Villers-Bretonneux, we are looking at this kinship and what resonated beyond that,” Dr Frederickson said.

“The bond is still there of course; the French are eternally grateful for that contribution and Australians equally were shaped by their experience during their conflict.”