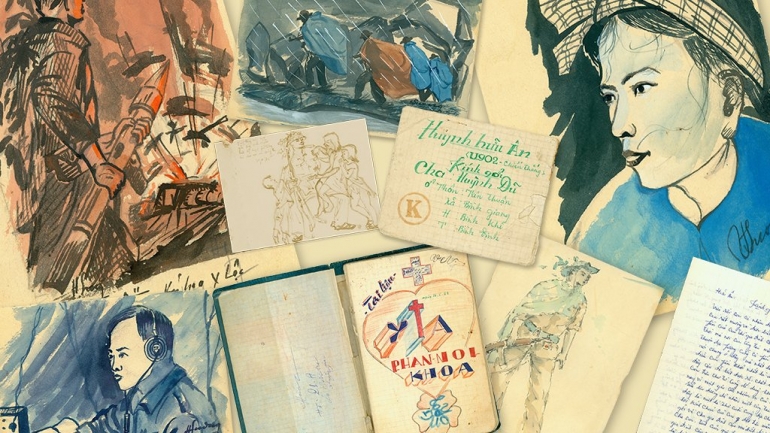 When Captain GW Dennis retrieved a portrait of a woman from a burning house in a deserted Vietnamese village he wanted to return it to its rightful owner.

There was no sign of life – no people, no animals, no bodies. Nothing except for the painting in a smashed picture frame inside the burning house.

He held on to the portrait for 45 years until he heard about Operation Wandering Souls, a special UNSW Canberra project, that helped him give it back.

In 2012, the group of Australian veterans and academics put out a call – they were collecting artefacts, souvenirs and items taken during the war and returning them to Vietnam. Captain Dennis got in touch.

It was then that a Vietnamese newspaper published a copy of the painting. It was spotted by a local man, Le Hang, who recognised the woman depicted as his mother.

He made contact with the Operation Wandering Souls team and was overjoyed when he was presented with his mother’s portrait.

Operation Wandering Souls hope there are more stories like this to tell. The team, headed by UNSW Canberra Adjunct Lecturer Dr Bob Hall and Visiting Fellow Derrill de Heer, are putting the call out again.

While some of these items will be graciously received by the original owners or their families, others will serve a different purpose – they could help locate Vietnamese soldiers still missing in action.

At the end of the Vietnam War there were six Australians listed as ‘missing in action’. Their bodies have since been recovered and returned home with the help of Vietnamese authorities.

There’s still an estimated 300,000 Vietnamese soldiers missing in action and Operation Wandering Souls are attempting to return the favour.

Items that were collected during the war – photographs, diaries, letters and documents – could help a family learn where their loved one is buried.

This is of particular importance in Vietnamese culture, as many believe the spirit of those who died violently, or whose fate is unknown, will wander forever unless the appropriate ceremony is held for them.

“Please rummage through your old steel trunk or wherever the items are, find them and send them to the Operation Wandering Souls team, along with as much as you can recall about the circumstances by which you ‘captured’ them,” Dr Hall said.

Scans of items and information can also be sent to Bob Hall or Derrill De Heer using the contact information below. Items can be sent anonymously if preferred.

“These things won’t be of much interest to our children, so now’s the time to do something with them.”

Operation Wandering Souls began in 2012 and tracked the location of every battle fought by the 1st Australian Task Force, which resulted in the death of a People’s Army or Viet Cong soldier.

Australian army policy was to bury the dead at the scene and document the burial.

Presented as an interactive battle map in the ‘Australia’s Vietnam War’ website, the data was enthusiastically received by Vietnam, however it simply showed the numbers killed at each location.

The second stage of the project linked 450 names to specific burial sites.

The third stage of Operation Wandering Souls saw the first collection of items returned to Vietnam.

The project team said the soldiers of the 1st Australian Task Force held the men and women of the People’s Army and Viet Cong in high respect for their courage and determination in battle.

They hope that their efforts are seen as a mark of that respect, a gesture of reconciliation and an expression of gratitude for the efforts of the Vietnamese in helping to locate and repatriate Australia’s missing in action.

“If the situation was reversed we’d like them to do this for our families.”

Derrill De Heer, Visiting Fellow of the School of Humanities & Social Sciences at the UNSW Canberra, 0414 574 605.