THE CONVERSATION: What if the 2022 federal election gives us a hung parliament, but those with the balance of power want Morrison gone? 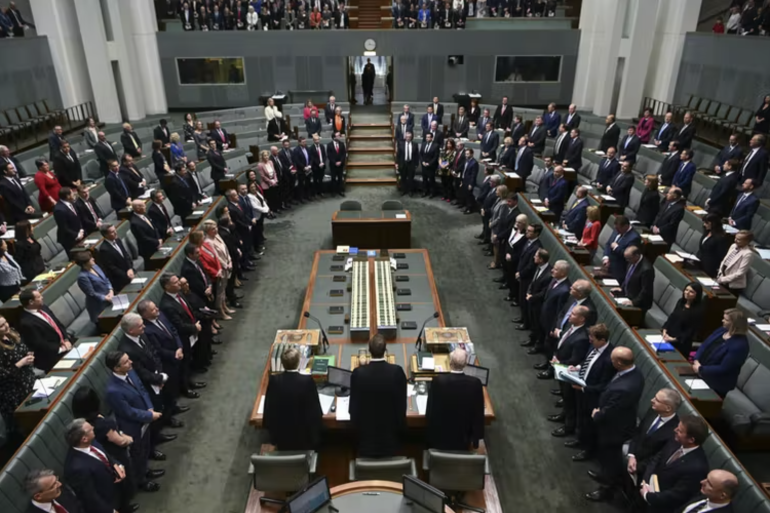 The Chamber of the House of Representatives. Photo: AAP/Lukas Coch

Most commentators on the coming federal election probably see a hung parliament and a minority government as one possible outcome. There is already a crossbench of seven, with five independents plus Liberal defector Craig Kelly for the United Australia Party and Greens leader Adam Bandt.

And there is a strong push from independents in several seats, most of them currently held by Liberal members in metropolitan areas. A larger crossbench is possible, a drastically smaller one unlikely.

Labor is well ahead in the polls nationally, but its vote is far weaker in Queensland than elsewhere, a state in which it currently holds just one-fifth of the available seats, six out of 30.

There are relatively few seats available to Labor in the least populous states: Western Australia, South Australia and Tasmania. It could win seats in New South Wales, but its gains might be counterbalanced by losses. The same scenario could occur in Victoria, where Labor’s vote was already high at the 2019 election.

It remains conceivable, then, that Labor could gain a healthy national swing but fall short of a majority, as it did in 1940.

What would happen in such a scenario of a divided house and significant crossbench?

Most commentators possibly envisage something like the 17-day bargaining that occurred between the independents and Greens with Julia Gillard and Tony Abbott in 2010. It is possible this could happen again, leading either to another term for Scott Morrison or a new Labor minority government led by Anthony Albanese.

However, another scenario is possible, as Sarah Martin briefly hinted at the end of this week’s ABC Insiders program: a minority Coalition government with a new prime minister. There is also a precedent for this outcome, and this year is its centenary.

The Country Party, which had emerged nationally at the 1919 election, now had 14 seats, a gain of three, and there were two “Liberals”, but both of them formidable Victorians: William Watt and John Latham. Hughes could not continue to govern without the support of the Country Party. There was no prospect of his gaining Labor backing. They regarded him as a traitor and a “rat”.

But the Country Party had decided Hughes must go. Hughes had split the Labor Party over the issue of conscription for overseas service in 1916. He then led a government made up of ex-Labor conscriptionists and his erstwhile opponents in the Liberal Party. From 1917, they would call themselves the Nationalists, and they held together as long as there was a war to be won. But once that war was over, the cracks widened.

One reason for this is that Hughes had abandoned the Labor Party but not its ideology. He remained enamoured of state ownership and state intervention. He supported a large increase in tariff protection resented by many farmers. He was also authoritarian. It was easy for opponents on his own side of politics to paint him as an unrepentant socialist. And the emergence of the Country Party during the first world war had created another coterie of political opponents. Under the leadership of the Grafton doctor, Earle Page, it had combined with Labor almost to topple the Hughes government in 1921 in a budget vote. 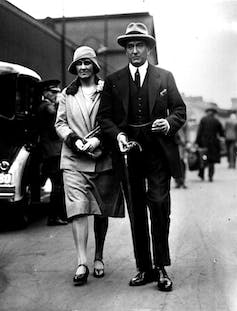 Stanley Bruce became prime minister in 1923 after the Country Party offered its support to the Hughes government - on condition Hughes was no longer prime minister. National Archives of Australia

After the 1922 election, Page’s moment arrived. But the Country Party did not throw out the government. It made the removal of Hughes as prime minister conditional on its support, along with a large swag of ministries in a coalition government – it would gain almost half. The coalition tradition in federal politics dates from that moment, in early 1923. The young treasurer, Stanley Melbourne Bruce, became prime minister. Page became treasurer. Their government would last until 1929.

It is possible that after a 2022 election, all or some of the crossbench could operate in a similar way to the Country Party in late 1922 and early 1923, if indeed Scott Morrison survives until the election. Morrison is personally unpopular in the electorate, with Anthony Albanese having drawn level as preferred prime minister, as well as in his party.

Josh Frydenberg, if he retains his seat at the coming election, might be palatable to many voters no longer willing to support Morrison after the multiple failures of his leadership. A loss of seats at the 2022 election would further weaken his credibility. Frydenberg might succeed to the prime ministership as Bruce did in 1923.

The independents are in almost every case representing, or contesting, seats that would otherwise be held by the Liberals or Nationals. Most are in affluent suburbs of Sydney, Melbourne, Perth and Adelaide. The candidates are often successful professionals of the kind who would once have found a natural home in the Liberal Party. From the 1960s, some of this “moral middle class”, as historian Judith Brett has called them, went over to Labor. Some also now vote for the Greens. 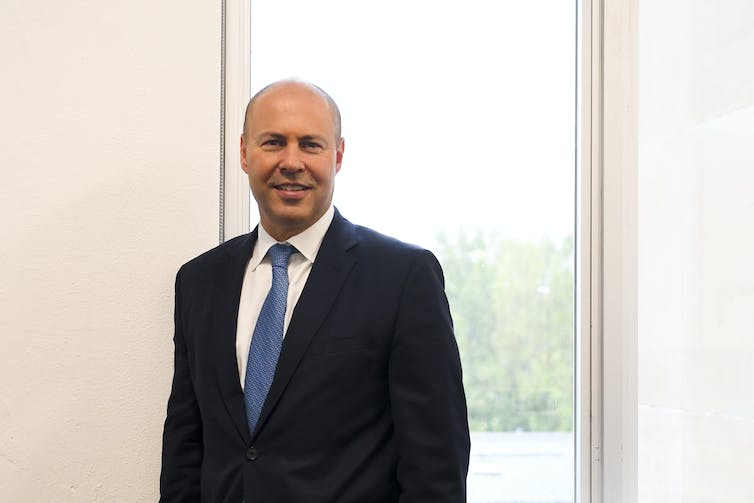 In the attitudes of these independents, there are no signs of economic radicalism. Most are socially progressive. Some have serious Liberal pedigrees. Wentworth candidate Allegra Spender’s grandfather Percy was elected to parliament as an independent in 1937, became a minister in the wartime government of Robert Menzies as a member of the United Australia Party, and after the war became a Liberal external affairs minister in another Menzies government. Her father, John, was also a Liberal parliamentarian.

Kate Chaney, the independent standing for Curtin, comes from a family of Liberal royalty in Western Australia. Zoe Daniel and Kylea Tink, if they win Goldstein and North Sydney, would represent electorates that have never before been held by Labor.

Their main causes are climate change, anti-corruption and gender equity. They want stronger action on global warming and renewable energy, a federal integrity commission with teeth, and action on sexual harassment and assault, and gender discrimination and inequality. Most new candidates are women. All with any prospect of holding or gaining a seat are in natural Coalition electorates. 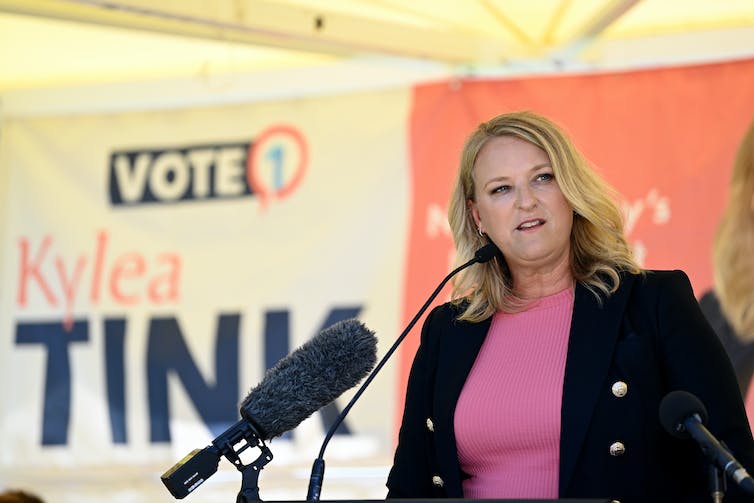 It is not difficult to see a group of independents with the balance of power demanding firm commitments on their main policy concerns in return for their support. But they are unlikely to trust Morrison to deliver. He has often tried to present himself as a transactional politician willing to do business. But he has emerged from almost four years in office with a reputation for big announcements, a failure to deliver, and a general slipperiness.

A crossbench made up of a Greens member and an assortment of independents that would also probably include Bob Katter would not be able to agree on all of the policies they wanted from a minority Coalition government.

But they might be able to agree that the Morrison brand is now so toxic that it needs to be replaced by another. They might also have problems with climate sceptic Barnaby Joyce.

Concessions to the independents on climate policy in particular would be bound to exacerbate frictions already evident between the Liberal Party and Nationals. But Nationals with a more moderate position on climate, such as Michael McCormack and Darren Chester, could help a new Liberal leadership in dealing with the demands of the independents.

The broad scenario we set out here is necessarily speculative, but informed by historical precedent. Independents acted in something like this way to force the removal of Nick Greiner as Liberal premier in New South Wales in 1992 after an adverse ICAC finding, later overturned in court. John Fahey replaced him as premier.

If a federal crossbench went down this path, Liberals and Nationals would be faced with a hard choice. Would they be willing to give in to such bold external interference in their autonomy to remain in government? Or would they be willing to stand firm and slip into fruitless and irrelevant Opposition that could last for many years?

Labor, after all, has shown that it can run a parliament under minority government – indeed, Albanese was a key figure in that success – and it might be in a better position to get the politics right this time round if given a second chance.

We suspect, faced with such a choice, there would turn out to be many more transactional politicians in the federal Liberal and National parties than Scott Morrison.