Dogs and drones: unlocking the benefits of AI mustering 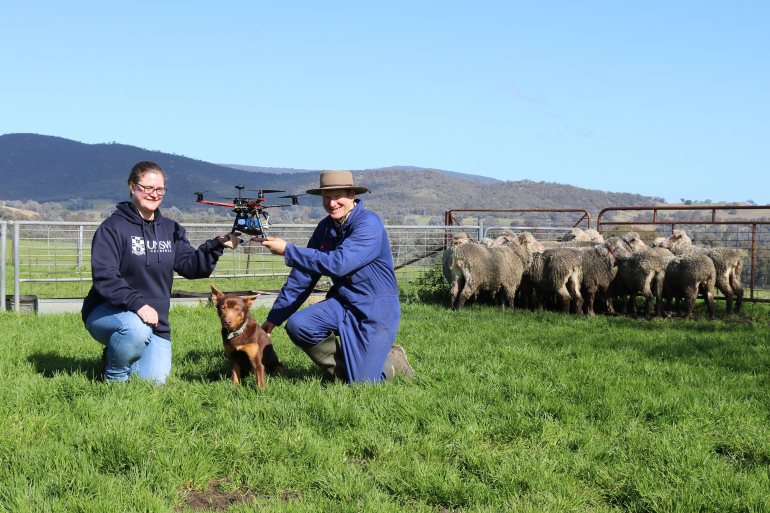 Drones will be put to the test against working dogs to muster sheep as part of new UNSW Canberra and Charles Sturt University research.

It builds on research published by UNSW Canberra that investigated the animal welfare implications of using drones for mustering, which found that the novel method of herding could be less stressful for sheep than traditional methods.

UNSW Canberra is now partnering with Charles Sturt on trials at Holbrook to directly compare the stress levels of sheep when being mustered using experienced sheep dogs to that of mustering with a drone.

Squadron Leader Kate Yaxley, a Visiting Military Fellow at UNSW Canberra, said there’s potential for unmanned aerial vehicles (UAVs) or drones to be used for mustering without the need for motorbikes and sheep dogs.

“Drones are increasingly being used in agriculture, not just to check sheep but to try to round them up,” SQNLDR Yaxley said.

“However, the technology hasn’t been specifically designed for mustering and there’s a need for more research to understand the impact of this on the health and welfare of the sheep.”

“If technology can be employed to muster sheep in ways that are less predatory than dogs, we should research why and how,” Professor Allworth said.

The research is also examining the most effective drone manoeuvres for mustering and what sort of drone features would make the technology easier to use for farmers.

One of the potential barriers to the use of drone mustering is the need to have an experienced pilot and SQNLDR Yaxley hopes that barriers can be overcome with the use of artificial intelligence (AI).

“This means there is potential for greater autonomy with some of the high-end skills in piloting the drone, and in interpreting if the sheep are responding safely and with low stress,” SQNLDR Yaxley said.

The research team is adapting a model of sheep flock behaviour and movement, to account for how the sheep respond to the drone and as a base for the machine learning of AI.

The team is currently seeking investment from industry and government to further this research.