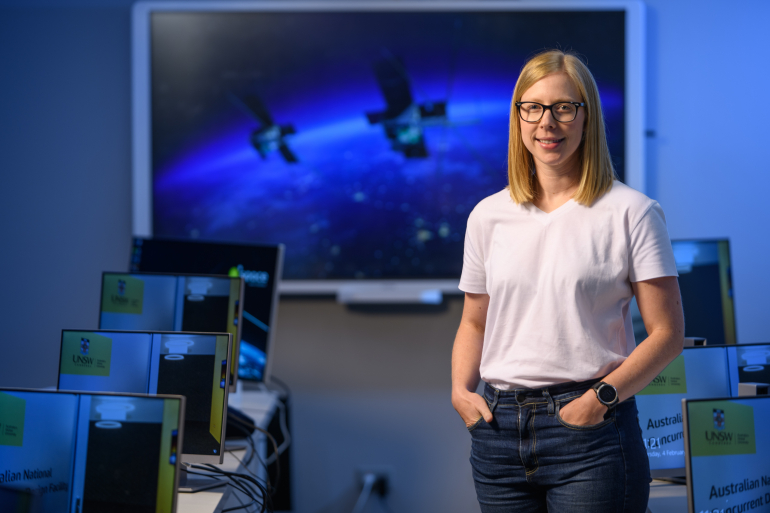 Dr Bright found her passion for space in the pages of Encyclopaedia Britannica volumes during her early primary school years, where she first read about the solar system and the lifecycle of stars. Unaware that a career in space was a feasible option, she originally enrolled in a civil engineering degree after finishing high school.

“At the time I’d had very little exposure to engineering and didn’t understand the distinction between the different disciplines,” Dr Bright said.

“In those days we didn’t have the STEM outreach programs for girls that are thankfully becoming widespread now.”

Two years into the degree, she found that she much preferred mechanical engineering and switched courses.

As part of a third-year signal analysis class, Dr Bright practiced signal processing techniques on a publicly available signal emitted from NASA’s Phoenix Mars Lander as it descended to the Martian surface.

The lecturer screened inspiring footage of NASA’s mission control team during the landing as an introduction to the class project, which led Dr Bright to realise she could combine engineering with her love of space.

“To me, successful space missions demonstrate what humanity can achieve when we aim high, set aside our differences, and work together effectively,” she said.

Fast-forward to today, where she has a PhD in spacecraft propulsion and leads the flight operations of a ground-breaking Australian satellite mission.

In the lead up to launch, Dr Bright and her team completed a number of rigorous testing regimes on the integrated M2 spacecraft.

“We try to break the spacecraft while it’s still on the ground and we can fix it, with a strong focus on the software and hardware that we rely upon during the launch and early orbit phase of the mission,” Dr Bright said.

We analyse the on-board flight software and test every logic branch that can be invoked during this phase to ensure we’ll be able to communicate with the spacecraft after it’s ejected from the rocket.”

M2 is in orbit now, but that doesn’t mean the testing is over. Before commanding the two satellites to separate, Dr Bright and her team need to be confident that the separation will be effectively controlled to remain safe.

“The conjoined satellites need to be pointing within 20 degrees of the along-track direction at the moment we command them to separate to ensure they won’t bump into each other on a future orbit,” Dr Bright said.

This check has become increasingly important for the responsible use of space, with many objects in orbit around Earth.

If they discover a problem during on-orbit divorce rehearsals in the coming weeks, the multi-disciplinary team can update the software of the main flight computer and satellite subsystems. The updated software will be uplinked and applied to the satellites, and the divorce rehearsals repeated.

The most important part of this testing process is the collaborative approach that the team takes to solving problems. Dr Bright said trusting her teammates is key to addressing issues efficiently and effectively.

“Bringing together the diverse expertise of several team members allows us to solve problems much more quickly than any of us would be able to alone; it’s a satisfying process where each team member contributes a different piece of the puzzle,” she said.

The M2 divorce is planned for mid-2021 and begins the formation-flying phase of the mission, where the relative position of the two satellites will be controlled using aerodynamic drag.

The moment represents a key opportunity to test and advance the space surveillance opportunities of UNSW Canberra Space, such as the tracking telescope operated near the Cingulan-hosted ground station near Yass.

A host of space technology demonstrations and science experiments will follow as the mission unfolds. Australia’s expertise base for performing cutting-edge space activities to meet national need, and for educating the future space workforce, will strengthen and grow in the process.