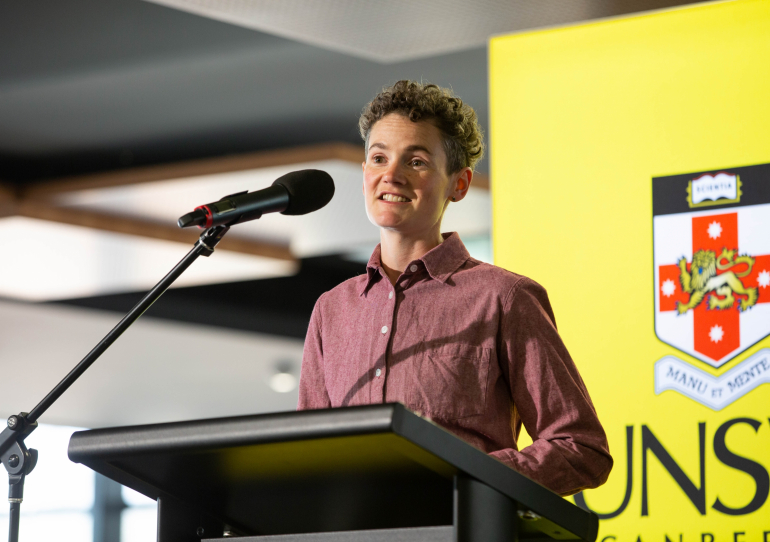 UNSW Canberra Climate Scientist Dr Sophie Lewis has been named the 2019 ACT Scientist of the Year.

Presented by the ACT Government, the award celebrates Canberra’s emerging scientists and aims to inspire young people to consider a career in science, technology, engineering and mathematics (STEM).

Dr Lewis’ interest in science began at a young age.

“I wanted to be a scientist since I was five years old and my parents took me out stargazing one night,” she said.

“As I went through university, I became really interested in climate change because it’s such a big problem that we’re all going to face in the future.”

Dr Lewis studies weather extremes and how climate change contributes to events such as bushfires and droughts.

UNSW Canberra Climate Scientist Dr Sophie Lewis has been named the 2019 ACT Scientist of the Year.

“We know when it comes to how climate change is affecting extremes, like our heatwaves, it can be a really big issue in terms of human health or our natural ecosystems like the Great Barrier Reef,” Dr Lewis said.

“The work that I'm planning on doing in the future is looking at how bad it could get, what is the worst that we should be preparing for and how can we be planning now so that we're most resilient and most adaptable in the future.”

Dr Lewis is a member of the team producing the latest Intergovernmental Panel on Climate Change (IPCC) report.

IPCC reports serve as the internationally accepted framework for climate change action and are used to establish global targets, such as the Paris Agreement.

UNSW Canberra Rector Professor Michael Frater said the award was a major achievement for Dr Lewis and the University.

“Sophie is an outstanding member of the UNSW Canberra community, not only for her research within the field of climate science, but also for her ability to inspire our students and other young Canberrans,” he said.

“From running workshops with preschool children to teaching at UNSW Canberra, Sophie is extremely passionate about sharing her love of science.”

As ACT Scientist of the Year, Dr Lewis will become a science ambassador for the territory and continue to motivate other young scientists.

“It can be hard to stay positive when you're working in a field like climate change, but I do get a lot of optimism and hope from seeing how knowledgeable and active young people are in terms of tackling climate change and acting towards their future,” she said.

“I hope to use this award to work with school children and college-aged children in Canberra to help empower them and build their capacity as future leaders in climate action.”

The award has been running for five years and comes with a $30,000 prize. Dr Lewis said she will use the prize to establish a youth climate network, providing young people with mentorship and access to scientific information.