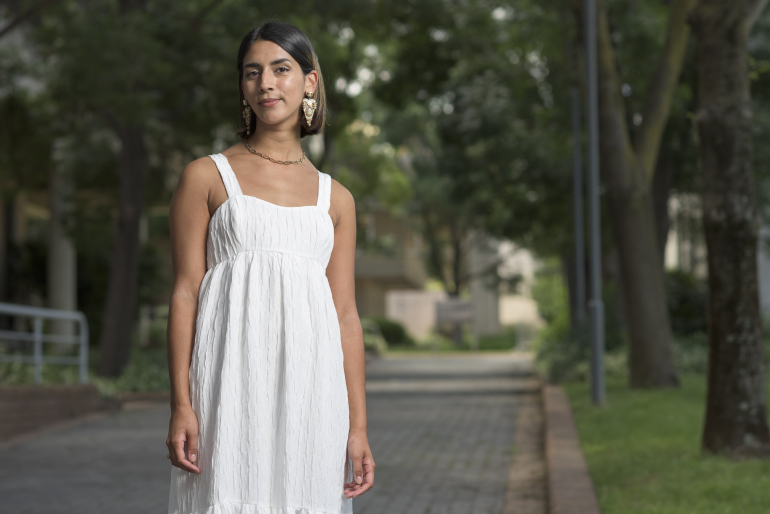 One year into her cultural geography PhD research, she will present what she has discovered so far at the UNSW Canberra Humanities and Social Sciences (HASS) HDR Conference.

“My research is really interested in finding new ways of thinking and acting in response to these ‘troublesome times’, which the themes of this conference rightly spotlights,” Tara said.

Tara’s previous research looked at cinema as a privileged art form, which generates new ways of thinking and feeling.

“I watch a lot of films so finding so much rich, theoretical work about something I love was really exciting,” Tara said.

“Fashion as an art form definitely hasn’t received nearly as much attention, it’s too easily dismissed as a frivolous feminine fancy, or as ‘capitalisms’ favourite child’. So, I’d like to contribute both something to address this lack, and to the crucial ethical and political project of resisting the despair and negativity of our times.”

Tara’s presentation Affirmative Ethics and Making Room for Something Else to Happen in Research with Fashion: Theoretical Springboards will kick off the ‘Challenging Boundaries in Fashion, Textiles and Media’ panel at the conference.

“Affirmative ethics is about finding ways to process the negativity around us into something else, stubbornly positing that the future could still be something other than it seems in the present,” Tara said.

Tara said we tend to think of fashion and style as a personal thing, but she believes there’s much more to it than that.

“We are influenced by things around us, we dress for occasions, we perhaps dress for change: fashion and style exceed the personal,” Tara said.

“I’m interested in the spectacle of fashion catwalk shows such as Chanel, who actually ‘launched’ a rocket as part of their Fall-Winter 2017 show, and sustainable fashion labels such as Canberra-based ‘All is a Gentle Spring’, who make beautiful garments inspired by both 18th-century court dress and 1980s gymnastic outfits.”

Despite the challenges of 2021, Tara said the first year of her PhD has been productive and enjoyable.

“I am very fortunate to have two such inspiring and interested supervisors (Dr Nina Williams and Professor JD Dewsbury) and a very supporting and entertaining group of friends here at UNSW,” Tara said.

This year, in addition to a lot of reading, she has attended two conferences, completed an intensive summer school course with Dutch institution, Utrecht University, and written a book chapter for a forthcoming publication.

“So even though the last two months have been spent locked down at home, I’ve still managed to do plenty of exploring.”

The HASS HDR Conference will be held virtually on 14 October. Registrations are now open.