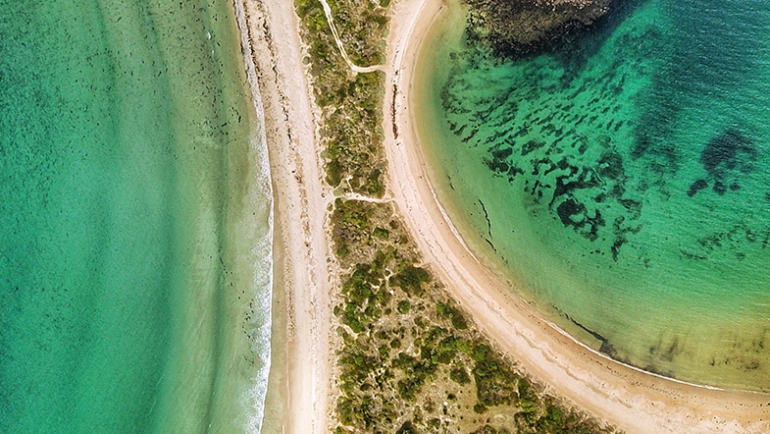 Along with an international research team, Dr Oliver has applied new technology to more than four decades of beach profiling at Moruya.

In a new paper published by Geophysical Research Letters, Dr Oliver and Dr Toru Tamura from the Geological Survey of Japan, have outlined their recent findings on the frequency of extreme erosion events. These can be used to indicate the frequency of future events.

“Beach monitoring programs in NSW have recorded several significant erosion events over the past 40 to 50 years,” Dr Oliver said.

“The two longest continuous records are at Collaroy-Narrabeen Beach, which began in April 1976, and at Bengello Beach (formerly called Moruya Beach) in 1972.”

The Bengello Beach monitoring program recorded the extreme storm of May, 1974, and several subsequent events culminating with a severe storm in 1978.

A number of UNSW Canberra academics including Emeritus Professor Roger McLean and Dr Jiashu Shen have been involved in the Bengello Beach monitoring program. The program has provided new insights into response of beaches to extreme storms.

“These individuals have undertaken a tremendous effort over many years to collect and collate topographic profiles of the beach using surveying equipment,” Dr Oliver said.

The storm of 1974 and subsequent events caused widespread erosion of beaches along the NSW coast and physical evidence of the scarp can still be found on many beaches along this coastline, including at Bengello Beach.

Other storm events over the intervening years have also caused significant coastal erosion, including the well-publicised damage to several homes along Collaroy-Narrabeen Beach in June, 2016.

“The main goal of this research was to understand the frequency of extreme erosion events like that of 1974,” Dr Oliver said.

“Understanding this is important for coastal planning and management of sandy beaches along the NSW coast but is difficult to determine, as our beach monitoring programs are yet to record another event of similar magnitude.”

The research team looked beneath the dunes behind the beach for evidence of storm events using a combination of high-resolution Ground Penetrating Radar (GPR) and Optically Stimulated Luminescence (OSL) dating.

This project also involved Dr Alistair Cunningham from Aarhus University in Denmark and Professor Colin Woodroffe from the University of Wollongong.

“We were able to utilise the beach monitoring dataset from Bengello Beach, which recorded the 1974 event, to test our methodology and help us establish a physical signature of an extreme storm event, enabling us to look for evidence of others in the past,” Dr Oliver said.

“The results suggest that at least one other event of a similar magnitude to May, 1974, has occurred sometime between 1650 and 1700. This indicates that storms of this magnitude are a recurrent phenomenon along this coastline and should be considered by coastal planners and managers.”