Indonesian elections and the role of the military 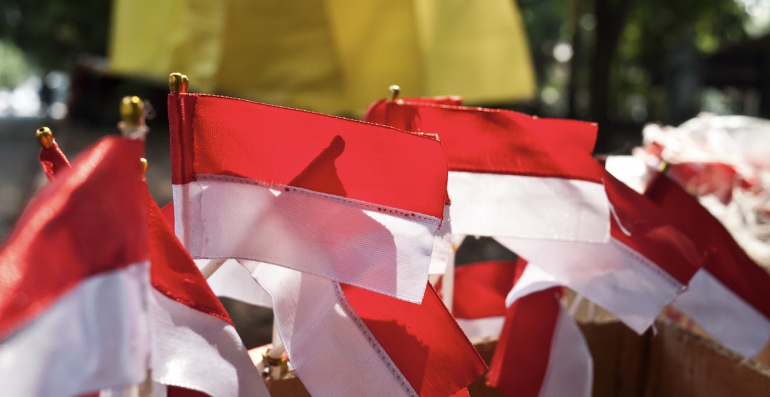 The Indonesian presidential election is shaping up into a tight contest. But whoever wins, determining the future role of the military in Indonesia’s government institutions will have a lasting impact on the country’s democracy.

On 17 April, more than 192 million Indonesians will be eligible to vote in the country’s general election. It will be the country’s fifth election since President Suharto’s three decades of authoritarian rule ended in 1998. More than 300,000 candidates are currently campaigning for 20,528 seats across five levels of government, ranging from the presidency to local municipal legislatures. But despite these impressive numbers, the extent to which democracy has taken hold in Indonesia is open to debate. In recent years, Indonesia has received mixed results in The Economist Intelligence Unit’sDemocracy Index. Between 2016 and 2017 its ranking amongst 167 countries had a marked decline from 48 to 68. The authors of the report noted the rise of religious intolerance was a contributing factor in this decline. Indonesia’s ranking climbed slightly higher to 65 in 2018, and it is hoped the upcoming elections will further improve its democratic standing. However, with the future role of the armed forces in civilian life now shaping up as a major election issue, there are growing concerns closer ties between Indonesia’s civil and military branches may hinder the country’s democratic progress.

Unsurprisingly, it is the presidential race that has been drawing the most attention during Indonesia’s election season. The incumbent President Joko “Jokowi” Widodo is running against Prabawo Subianto for the second time – the pair also faced off against each other in the 2014 presidential race. Prior to becoming president, Jokowi was the Mayor of Surakarta and the Governor of Jakarta. By contrast, Prabawo is a retired army general and a former commander in Indonesia’s special forces (the Kopassus). However, it is perhaps surprising that concerns about closer military and civil ties are not founded on the different backgrounds of the candidates. It is not expected that Jokowi’s election would lead to greater civil supremacy and Prabowo’s to militaristic rule. Rather, whoever wins, it is likely there will be an expanded role of the military in the civil sphere.

Both Jokowi and Prabowo have tried to select vice presidential running mates that will make their respective tickets appeal to a wider range of voters. Jokowi has selected Ma’ruf Amin, an Islamic cleric. In doing so, he has prioritised appealing to Muslim voters over trying to match his rival’s military credentials. In the 2014 election, Jokowi also refrained from selecting a running mate with a military background and instead chose Jusuf Kalla, a bureaucrat with experience in business.

However, Jokowi has not distanced himself completely from the military. To help boost his military credentials he has several retired army generals in his inner circle. Amongst them are Wiranto, Luhut Panjaitan, Agum Gumelar and Moeldoko. With the exception of Moeldoko, they all rose to the top ranks during Suharto’s final decade in power in the 1990s. At the time, the country’s military was privileged by a “dual-function” practice (dwifungsi) that allowed active officers to occupy civilian positions. The practice was validated by the former national defence doctrine, which allowed members of the armed forces to fill non-military roles in order to prop up national resilience in ideology, politics, economy and culture. In Widodo’s current administration, the roles of the retired officers are not exclusively limited to providing advice on national security and defence issues.

Jokowi has been facing problems due to a swelling of the middle ranks of the Indonesian National Armed Forces (TNI). There are too many mid-ranking officers in the army with no units to command and few chances for career progression. As such, the Jokowi government has been scrambling to find roles for them. At the joint Armed Forces-National Police meeting of leaders in January, it was announced 60 new senior positions would be created in the TNI for high-ranking officers. Following this, the public was not particularly surprised when the Jokowi campaign team proposed allowing officers still active in the military to fill civilian posts in areas such as disaster management, infrastructure and intelligence. However, the government and its coalition wing in the parliament maintain that any such roles would be kept separate from the rest of the civil administration.

In contrast, Prabowo has been trying to downplay his own military credentials to distance himself from Indonesia’s authoritarian past. He has selected Sandiaga Uno, a businessman, investor and former deputy governor of Jakarta, as his running mate. Prabowo employed a similar tactic in 2014 when he ran with Muhammad Hatta Rajasa, a technocrat. But he has appointed Djoko Santoso, a former commander of Indonesia’s armed forces, as his campaign chief.

It is remarkable though, that despite being proponents of the “dual-function” creed and the notion that it delivered political stability and security in the Suharto era, Prabowo’s campaign advocates for keeping the military out of civilian institutions. Despite receiving support from a new minor party backed by Suharto’s children – Prabowo himself used to be married to one of Suharto’s daughters – Prabowo’s campaign asserts that “return to the barracks” is inevitable and essential for maintaining the professionalism of the TNI. However, a representative of his campaign stated some deployments are warranted providing they are compliant with “regulations” and in the public interest for “development.”

Military reform in 2004 instructed TNI personnel to resign or retire from service before taking a civilian post. Nonetheless, the legislation enables an active officer to hold a non-military post in ten state agencies including the defence ministry, the national intelligence agency, the national search and rescue, the cyber security and signals agency, the anti-narcotics agency and the supreme court. A proposal to further revise the existing legislation is expected to add the maritime affairs coordination ministry, the president’s staff office and maritime security agency to this list. Along with the formation of new commands within the armed forces, the expanded non-defense posts would ensure positions for upcoming high-ranking officers.

Rights groups have aired concerns about the return of the military into civilian life amidst concerns over a return to the “dual-function” policy. A commissioner from the National Human Rights Commission has indicated the imbalance between the large number of high-ranking officers and available posts within the armed forces and the subsequent plan to deploy them in civilian positions, indicates military reform is not making much progress.

While rejecting the “dual-function” policy, both candidates defend their positions over the expanded role of the military and claim their policies comply with current legislation. Furthermore, they remain committed to the modernisation of the armed forces. Jokowi has talked much about the military’s need for technological modernisation and to further develop defence industries to become more self-sufficient, as well as the need for integration of cyber security into the defence system. By contrast, Prabowo has emphasised the most important areas for military reform as improving the conditions for military personnel and increasing the defence budget.

Ahead of the election, what happens with military reform remains an open question. But a survey by Charta Politika last year indicated the TNI was Indonesia’s most trusted institution with a 73.5 percent approval rating. By comparison, political parties received the lowest approval rating of just 32.5 percent. The public currently seems to be content with the role of the TNI and it is no longer seen as the instrument of a single leader as it was in the Suharto era. The challenge now is to keep the armed forces neutral. A revision of legislation, if it happens, could lead to creeping expansion of the military’s role. In the 2019 presidential election, the two camps have so far been relatively diplomatic on the issue. This may mean that something more is liable to happen unexpectedly in this space. In a country where politics is often divisive and where promoting intolerance can often be used as a political weapon, there is a possibility for the future role of the armed forces to be further politicised, either by the politicians or by the military themselves.

Dr Nicolaas Warouw lectures in Indonesian studies at the School of Humanities and Social Sciences at UNSW Canberra. His research interests include the politics and lifestyles of Indonesian industrial labour, anthropology of climate change and natural disaster, and local politics in Indonesia.