Infernal Machines: the Royal Navy and the asymmetric challenge of mine warfare 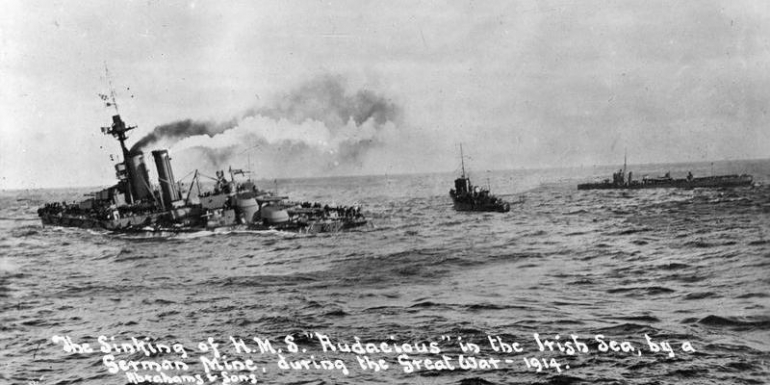 Richard Dunley is a Lecturer in History at UNSW, Canberra and has recently published Britain and the Mine, 1900-1915: Strategy, Culture and International Law with Palgrave Macmillan.

Why do military organisations develop and adopt some technologies with ease, whilst others face deep institutional opposition?

This is a hugely important question in an era of rapid technological change. Much of the work that has been done focuses on the way military materiel is shaped by the strategy, doctrine, culture and even administrative structure of its parent organisations.

But this is a two way street.

Technology becomes an essential part of the identity of many militaries. The very concept of the nineteenth century Royal Navy was bound up with the battleship as a technological system.

Similar associations can be seen more recently with regard to strategic bombers, aircraft carriers and arguably fighter jets.

These weapons become an integral part of their parent organisations and the dominance of them shapes decisions across a host of areas from acquisition to strategy.

This makes the adoption of dissonant technologies, that is those which do not conform to organisational ideals, extremely difficult.

For the early twentieth century Royal Navy it is impossible to imagine a more objectionable technology than the naval mine.

These weapons first came to prominence in the Russo-Japanese War, and were reviled by the Navy and the country more widely.

On a technological level the mine appeared to represent the antithesis of everything the Royal Navy stood for. It was as far removed from the battleship, which dominated the service’s thinking, as you could possibly get.

Its innate purpose, sea denial, was seen as the direct opposite of command of the sea, which was the role of a battlefleet. When combined with the indiscriminate nature of mines in this period, it seemed obvious that this nihilist technology had nothing to offer a country reliant on the sea, and a service bent on commanding it.

British efforts to get mines banned at the 1907 Hague Peace Conference appeared to confirm the rejection of mines as a weapon.

Despite this the pre-war Royal Navy adopted mines, developed the weapon and delivery system, and produced plans for a war against Germany that were reliant on mining on a scale never previously envisaged.

Understanding how and why an organisation chooses to adopt a weapon which is so obviously contrary to its organisational culture offers interesting perspectives on the processes of technological adoption and how asymmetric technological challenges effect this.

The Royal Navy’s initial interest in mining stemmed solely from a specific strategic challenge that they could not easily address using existing technology.

The geographic position of the German North Sea and Baltic coasts, with a German internal line of communication through the Kiel Canal, meant that a traditional blockade would be extremely difficult. Mines offered a simple solution, limiting ingress and egress from the German coast.

It was only through this prism that the service initially saw mines as serving any useful purpose. The technology remained flawed, but it was developed for a specific requirement.

The adoption of the technology and the development of the equipment and personnel necessary to undertake the single specific mission changed the relationship between the Royal Navy and the mine.

This partial assimilation and the development of a group of officers connected to the weapons system facilitated a gradual expansion of the roles in which mine warfare was seen as potentially serving a useful purpose.

The slow introduction of exercises with the fleet and involvement of the mining vessels in manoeuvres began to break down some of the deep-seated prejudices against the weapon.

This process continued even after the specific strategic situation, which had prompted the development of mining, had disappeared.

In the years before the First World War the Royal Navy began to consider using mines in tactical situations and for a range of other tasks. The process of institutionalisation was, however, beset by continued opposition on cultural grounds.

When war broke out in August 1914 the German Navy began deploying mines on a large-scale, but the British refused to follow suit.

The opposition stemmed from the firmly held belief that the role of the Royal Navy was sea control and not merely sea denial; and by this the service meant absolute control over the entire of the sea.

Ironically it was the Navy’s political chief, Winston Churchill who summed this up best, declaring that there was no require for the ‘passive fouling of waters by mines’.[1]

The return of Admiral Lord Fisher to the Admiralty in November 1914 saw a radical change in policy, with mining returning to favour in its original role, as a way of blocking in the Germans.

This strategy was only beginning to be implemented when Fisher resigned in 1915, but was returned to again later in the war. Mines also became a crucial weapon in the struggle against the U-boats, with thousands being laid down in both defensive and offensive fields.

This sudden institutionalisation of the mine was possible because of a shift in the way the Royal Navy conceived of its task.

The nature of the war at sea in the First World War meant that pre-war notions of absolute command of the sea gave way to more realistic aims of ensuring enough sea control to achieve broader Allied grand strategic goals.

This reconsideration of strategy allowed the Royal Navy to find a role for a weapon it had previously seen as serving no purpose. As with all military organisations the Royal Navy’s specific culture shaped how it saw the strategic situation it faced.

This led it to focus on certain solutions and technologies. It was only when the realities of conflict forced the service to reconsider its strategic outlook that it was able to see the role mines could play in helping it to achieve its broader aims.

Through these processes the Royal Navy institutionalised mine warfare, but the organisation’s culture was slower to change. Reginald Tyrwhitt summed up the views of many officers when he complained that mines had ‘completely put the hat on all honest fighting’.[2]

Image: MHS Audacious sinking in the Irish Sea after striking a mine, 27 Oct 1914, via the Imperial War Museum.