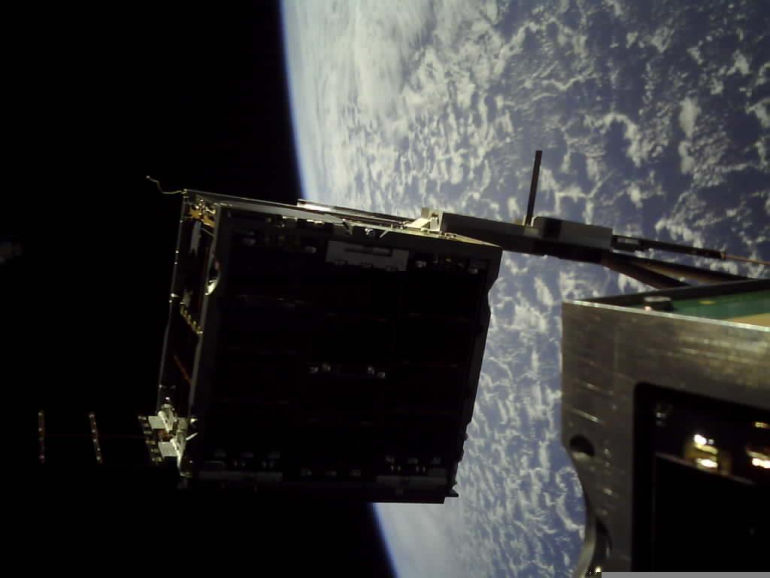 The two new satellites, M2A and M2B, are now flying in formation – a first for Australian cubesats, and a world-class capability.

“This is a very important milestone for UNSW Canberra – separating these satellites on orbit and in a gentle, controlled way is a serious challenge, as is formation flying,” Spacecraft Project Lead Andrin Tomaschett said.

This unique event has enabled participation from Australian and international organisations with ground-based and space-based surveillance systems to detect the two cubesats coming apart. Canberra-based companies Clearbox Systems and EOS, along with InTrack Solutions from Adelaide and international players LEOlabs, Northern Space Security and USAF, and 10 other organisations, have combined their efforts with UNSW Canberra and the Royal Australian Air Force (RAAF) for the task.

“We’ve put their sensors to the test and as a result have provided them with invaluable feedback for their sensor capabilities,” Space Domain Awareness (SDA) Lead Dr Melrose Brown said.

“On one hand, we’ve engaged some of our partners to provide conjunction screening for a safe time to separate. On the other hand, we challenged all of their capabilities to identify when the one cubesat would become two.”

The result has demonstrated the depth and strength of Australian SDA capability.

Since the launch of M2 in March, most of the team’s time has been preoccupied with meticulously commissioning the on-board systems and finalising the approach for the separation.

“As this was a first for our team and Australia, we spent significant time and effort establishing a rigorous plan, and involved many international third party organisations to help us assess the impacts of potential on-orbit behaviour of the spacecraft,” Flight Operations Lead Dr Courtney Bright said.

“In the end, we had to trust our on-ground testing and observed spacecraft behaviour during rehearsals, eventually commanding the real separation to achieve it. And we did, successfully!”

M2 separating into M2A and M2B

Sam Boland, Control Lead at UNSW Canberra Space, was behind the crucial piece of technology to achieve successful separation, known as the Attitude Control and Determination System.

“This system was designed and developed in-house at UNSW Canberra Space and ultimately demonstrated via the M2 Pathfinder mission,” Mr Boland said.

“It’s a major leap to perform successful attitude control in the final space environment as on-ground simulations and testing can only get you so far.”

This effect, together with strategic deployment of solar arrays and the on-board attitude control system enables the team to vary the satellites’ separation distance at will.

“Then it will be time for the next steps in this space research and technology demonstration mission,” Professor Boyce said.

“The initiation of formation flying is a landmark moment for the Defence Space Domain,” Air Vice-Marshal Roberts said.

“This allows testing of satellite separation mechanisms, and facilitates on-orbit research. The two satellites are packed with payloads such as optical telescopes which are informing future Defence surveillance concepts.”

In addition, the cubesats can be reconfigured while on orbit to undertake a range of objectives, which holds many possibilities for the future of such space capabilities.

“My hat is off to Australia’s most experienced sovereign space mission team. It’s a surprise to some, but we’re a team based in a university,” Professor Boyce said.

“Utterly creative and innovative, yet utterly and rigorously professional in our approach to space systems engineering and space operations.

“We do what we do so that our space research and engineering pushes the boundaries and grows Australian industry, our space education delivers a talent pool of skilled, high-tech thinkers for Australia, and we help meet needs on the ground.

“We succeed in all of that, and I’m very proud of the whole team.”