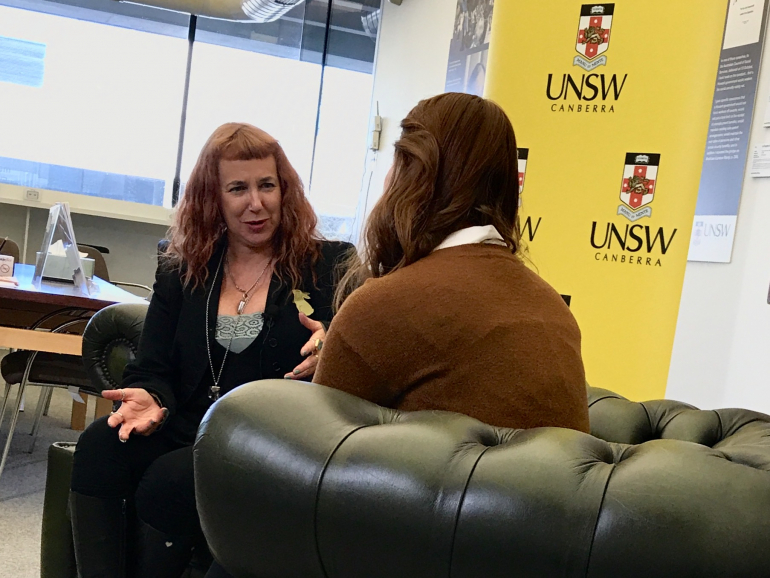 Award-winning, Victorian-based author Isobelle Carmody was today announced as the next ACT Writer-in-Residence at UNSW Canberra.

As the eldest of eight, Ms. Carmody’s story-telling journey began in childhood—a time marred by fears of the outside world: her father was killed by a drunk driver, and her mother worried constantly that her children would be taken away. The children often escaped through fantasy. “I told them stories as we had periods without television and there were not many books in the house for kids,” Carmody explains. “I drew on the myths and legends sections of our encyclopaedias, and they were usually horrifying stories that terrified us all; effective because I can now see they channelled the fears we had. Story telling is basically communication on steroids.”

Hailing from regional Victoria, Carmody says she read fiction constantly once she discovered the library, calling herself “a typical library lurker”. She began writing her first fantasy novel, Obernewtyn, in high school. The novel was picked up by the first publisher she approached in the 1980s, and went on to be shortlisted for a Children’s Book Council of Australia Book of the Year Award. Obernewtyn become the first of her highly acclaimed Obernewtyn Chronicles, pushing her to the forefront of Australian science fiction and fantasy writers.

Carmody worked as a journalist once she competed a Bachelor of Arts, and she continued to write novels, short stories and picture books for children and young adults. She now has more than 20 awards to her name, with a catalogue spanning more than 30 books. Notably, she won the 1993 Children’s Peace Literature Award, and the 1994 Book of the Year by the Children’s Book Council of Australia for her dark novel, The Gathering. She says of the peace award, “this is the award I am most proud of, because most of the time as a writer I feel I am doing what I love and I am lucky enough that people want to publish it and read it.”

She also includes drawing as one of her hobbies—and she’s accomplished in that area too. The first novel in her The Kingdom of the Lost Book series, Red Wind, won another Children’s Book Council of Australia Book of the Year, in 2011. This is a book she’d illustrated herself using pen and ink. The next book in the series is due out in July, and, Carmody says, she has soft spot for the main characters, as they search for a new home. “It channels a lot of the feeling I have about the mass of people on the move, who have lost their homes and are finding the world as inimical as the one I imagined as a kid,” she said.

Soon, Canberra will be ‘home’ to Carmody, though only temporarily. She says she was motivated to apply for the residency when her daughter recently moved to the ACT—to a place that is relatively new and unexplored for them both. It is here that Carmody will draw inspiration for her next project: an urban fantasy with a strong Canberra presence. “I will do a lot of walking and thinking in Canberra and I am very porous as a writer,” Carmody says, anticipating the places she’ll explore. “The Black Mountain Tower has something strange about it—strange as in a bit spooky and a bit enchanting. I want to walk around Lake Burley Griffin and go to all those monolithic places: the War Museum, Parliament House. But I will see them through my story, which I am really excited about. Excited to see what I make of Canberra, literally.”

She says she’s particularly excited to be based at the UNSW Canberra campus. “I love the culture of university, and I am looking forward to moving through it, even if I will be a salmon swimming the wrong way.”
The ACT Writer-in-Residence makes use of the resources of UNSW Canberra while researching and/or working on a creative project. The resident will also deliver a community engagement component.

View a video about the ACT Writer-in-Residence announcement.