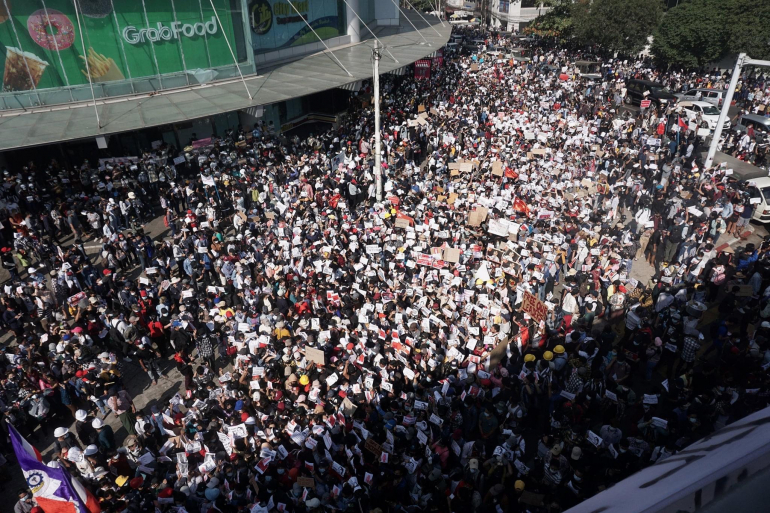 The dominant response to the military coup in Myanmar on 1 February has been, ‘Here we go again.’ Media commentary has highlighted the strong similarities between recent events and the 1988 coup, explained by the supposedly incorrigible and unrepentant nature of the military (the Tatmadaw). The foreign policy debates of the 1990s are echoing through time with strident calls for sanctions and more muted warnings (mostly in private, but with no less urgency) of the serious harm further isolation of this long-suffering country could do.

It’s still too early to say what the coup’s implications are for Myanmar’s political development or what the most appropriate international response might be—beyond strenuously objecting to an illegitimate usurpation of power against the will of the majority of the Myanmar people.

However, we must recognise that, rather than being a replay of 1988, the 2021 coup is in fact a different type of coup by a different kind of military at a different point in world time—and it requires a different international response.

Unlike 1988, the latest coup is not intended to change the political system but rather to change the government. Its leaders have carefully positioned the takeover within the framework of the 2008 constitution and they assure people that they’ll return power to an elected government after fresh elections. The constitution says that has to happen within two to three years, depending on the process.

They might be trying to placate the international community, the Myanmar people, their own soldiers or all of the above, but there are reasons to believe that this is their preferred outcome. The transition to a quasi-democratic system in 2011 was in line with the Tatmadaw’s self-image as ‘guardians’ of the union (rather than rulers) and it has served its institutional interests as well.

The coup leaders, however, have serious grievances against Aung San Suu Kyi, whose enormous popularity and renowned obstinacy ultimately upset the fragile power-sharing system undergirding the post-2011 reforms. We can expect the military to maintain the constitution but to take steps to marginalise the National League for Democracy (NLD), so that it can’t repeat its landslide election victories and reclaim government.

While many of the coup leaders’ statements and actions do bear a strong resemblance to 1988, the Tatmadaw is far less isolated and insular today than it was 30 years ago.

Unlike his predecessor, in many ways a recluse, the current commander-in-chief, Senior General Min Aung Hlaing, is a politician in waiting who has long had his eyes on the presidency. He’s as comfortable meeting foreign dignitaries as he is with new information technology.

The Tatmadaw’s ideology has also significantly evolved. While military officers in the 1960s, ’70s and ’80s were indoctrinated in the ‘evils’ of democracy, they have since been taught that their duty is to help establish and protect what the constitution calls a new ‘discipline-flourishing multiparty democratic system’.

Importantly, the current generation of soldiers has lived very different lives from those before them. Like the Myanmar people, they’ve benefited from more freedoms and broader economic growth. Many have had more interactions with foreigners, military and civilian, and they’re more familiar with international standards, experiences and viewpoints.

It’s likely that there’s significant unease within the Tatmadaw about the coup, and that this could grow if the military turns increasingly reactionary and repressive.

The political landscape in Myanmar today is far more pluralistic than before. In the 1990s, the military was essentially isolated from society and facing off against a single ‘enemy’—the NLD. This is not to disregard the role of the country’s numerous ethnic rebel groups, but their struggle for federalism and ethnic rights was always largely separate from the struggle for democracy.

Since then, the military has become the focal point for a coalition of Buddhist nationalist forces that includes political parties, leading monks and civil-society organisations, such as the Association for the Protection of Race and Religion, which are all anti-NLD.

The NLD is part of a much broader network of anti-authoritarian organisations, including a very active private media and numerous new think tanks and other politically oriented civil-society groups. Although the NLD was never good at building effective political alliances, this diversity makes for a much stronger and more sustainable opposition.

Both sides can count on the support of different segments of a vastly more connected and politicised population. However, there’s no doubt that supporters of the NLD and the struggle for democracy far outnumber supporters of the military and its reactionary political agenda, or that protests against the coup could grow to a point where the coup leaders will have to either compromise or use large-scale violence to restore order.

Myanmar is much more integrated into the world than it was three decades ago. Its international political and, especially, economic relations have greatly strengthened and diversified, as have its security partnerships (read: arms trade).

There’s also a much greater presence of foreign missions, transnational corporations and international organisations, including media and aid groups. In absolute terms, the generals have more to lose from negative international responses to the coup than before.

However, in relative terms, they are less vulnerable than they were in 1988. Their foreign currency holdings are much larger (in 1988, Myanmar was essentially bankrupt) and they have more options to balance against losses they may suffer from partial Western sanctions or the withdrawal of individual companies.

International politics has changed immensely since 1988 and since the end of the Cold War in particular. Many have asked: ‘How can they do this in the 21st century?’ But that premise is faulty: they can do this—and quite possibly will get away with it—exactly because it is the 21st century. When better to stage a coup than in a world of growing great-power rivalries and democracy decline, and with the disruptive impact of Donald Trump’s presidency still reverberating around the globe?

Even if Myanmar’s military leaders were not well informed about world affairs (which many of them now are), they would not have to look far from home for examples of feasible coup-style politics. When did we in the West last successfully stand up to a coup anywhere, never mind in China’s backyard?

I find it somewhat hopeful that the coup leaders are formally committed to respecting the 2008 constitution (for all its flaws, and whatever breaches they are guilty of in practice), mainly because it gives them a face-saving way out should they come to perceive that the costs of the coup are unsustainable.

Conversely, I fear that escalating confrontations between protesters and security agencies will lead to large-scale bloodshed and end hope of a quick return to civilian government. While it may be easy to distinguish between ‘right’ and ‘wrong’, the only way that this will not end in tragedy is through compromise. And when a military obsessed with order and stability (one thing that has not changed) confronts an essentially leaderless popular movement driven by youthful anger and shattered hopes, compromise is perhaps the hardest thing of all.

The international community must do all that it can to prevent the crisis from escalating to the point of no return. In the medium term, we must resist any temptation to force Myanmar, including its armed forces, back into isolation and insularity and risk sacrificing all the progress that, despite appearances, has been made over the past 30 years.

This article is republished from The Strategist under a Creative Commons license. Read the original article.