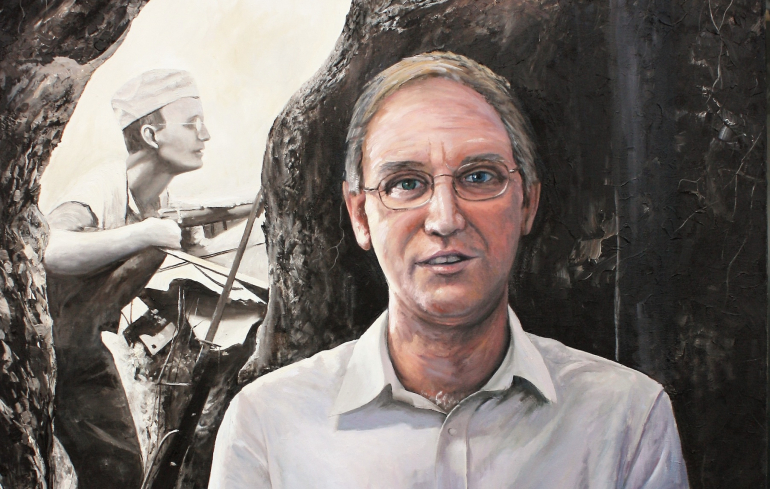 The School of Humanities and Social Sciences historian, who has published several books about the Gallipoli campaign, was painted by Canberra artist Margaret Hadfield.

“Peter sat for me 10 years back and I submitted the work into the infamous Archibald and of course it wasn’t hung,” Hadfield says.

“I was always bothered by the hands. Unfortunately, I had an artist friend sit for me as a substitute at the time as I didn't want to bother Peter again. His hands were much wider, hard physical worker’s hands!

“This year I decided to rework it, and while doing so found some other issues. I was hoping Peter hadn’t grown a beard or done anything dramatic to his looks. Fortunately, he hasn’t changed at all.

“It has taken all this time to get it right, I think! I’m much happier now.”

Professor Stanley has a strong commitment to field research and visited Quinn’s Post four times while writing the book.

“The Quinn’s book came out of my encounter with Gallipoli in 2002 (when I was the Australian War Memorial’s principal historian) and was the first of a dozen books I’ve written about the Great War,” he says.

He has since published Lost Boys of Anzac, Die in Battle, Do Not Despair and Simpson’s Donkey.

Professor Stanley describes the process of being painted as “odd”.

“Although it was painted in a studio in Queanbeyan, imaginatively I was seeing myself as sitting in a trench in Gallipoli,” he says.

“It felt awkward to have been asked, but I submitted with good grace because I recognised Margaret’s passionate commitment to telling the human experience of Gallipoli. I feel honoured to have been chosen to represent all those historians who immerse themselves in the reality of the past.”

Hadfield won the Gallipoli Art Prize in 2006 for her landscape painting, Ataturk’s Legacy.

The winner of the $20,000 award will be announced just before Anzac Day.