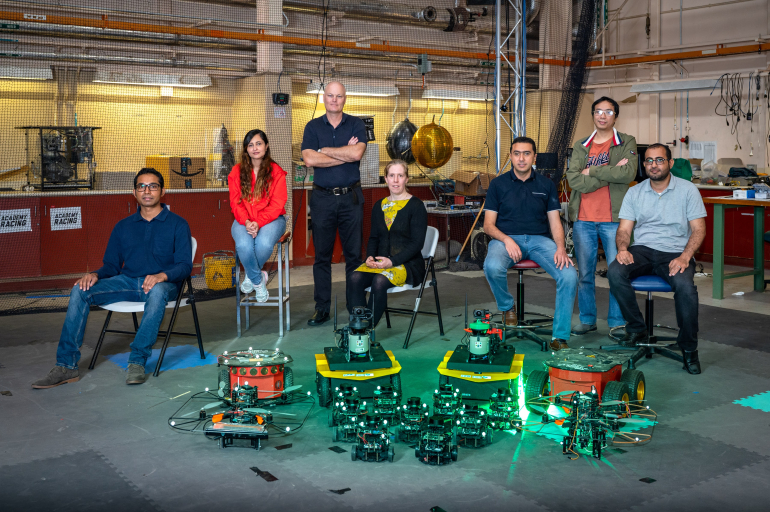 Just as a team of workers is more productive than an individual, the same can be said for robots.

UNSW Canberra researchers are working on various multi-robot system or ‘swarm’ projects to see how this evolving technology could be integrated into a range of fields.

Robotics expert Professor Matthew Garratt said not only do multi-robot systems have significant advantages over single-robot approaches because they can share the workload, but they can act as a safeguard if one or more of the individual robots stops operating due to battery depletion, malfunction, or interference.

However, swarms aren’t without their challenges. In fact, they face some of the hurdles that arise among groups of human workers.

“Once you have multiple robots cooperating on a task, there is added complexity because of the need for inter-robot communication, shared data and how to do shared task allocation,” Professor Garratt said.

In an ARC-funded project, led by Professor of Computer Science Kathryn Kasmarik, researchers are developing algorithms that will enable robots to evolve coordinated, collective swarm behaviours.

“The robots have artificial ‘chromosomes’ that represent their current behaviour. The algorithm can mutate and crossover these numeric chromosomes to create new behaviours. The robots try them out and if they are good, they will keep them to evolve in the next generation.”

The team, which includes Professor Garratt, Dr Rafi Khan, Dr Essam Debie, Dr Shadi Abpeikar, Dr Huanneng Qiu, Dr Vu Tran and Noha Khattab, are currently working on evolving ‘collective motion behaviours’. These include moving in a flock, moving in a line, or clustering and can be done while searching for a target or avoiding obstacles. 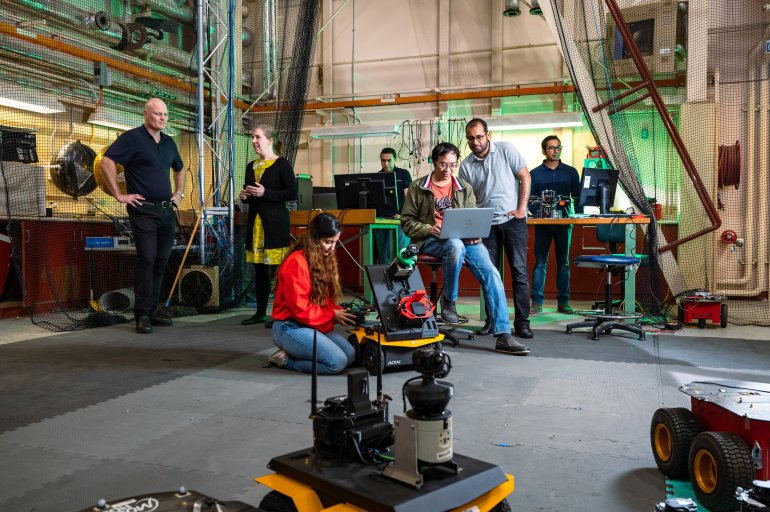 “In the future, we imagine that businesses will have a large number of different types of robots available,” Professor Kasmarik said.

“They will select a group of robots for a mission and put them into a ‘behaviour training area’. The robots will then be able to evolve behaviours adapted for their physical forms and environment, ready to complete a mission.”

The project aims to deliver the next generation of computational intelligence technologies that enable humans to harness large groups of robots for new kinds of transport and inspection tasks in smart cities, smart farming and defence.

In a separate project, funded by DST, a team led by Professor Garratt is developing approaches to multi-robot coordination for the purpose of operation in chemical, biological, radiological and nuclear (CBRN) contaminated environments.

Robots are an ideal replacement for human operators as they eliminate the risk of exposure to CBRN agents.

Professor Garratt said autonomous systems are already being used for other dangerous tasks, such as gas monitoring from drones and bomb disposal, however, there are no large-scale commercial systems using swarms of robots being used in CBRN environments.

“The use of autonomous systems to detect and track CBRN sources is in its infancy but the subject of much academic research,” he said.

“Operating in CBRN environments is one of the DST Science, Technology and Research (STaR) Shot missions. They are interested in fast and accurate detection, identification, source localisation and monitoring of low concentrations of CBR agents at long stand-off distances and over large expanses of complex terrain – which is an ideal mission for a swarm of robots.”

“As well as the multi-robot path-planning problem, we are looking at obstacle avoidance and formation control to keep the robots within communication range of each other whilst spreading out as much as possible to cover the area quickly,” Professor Garratt said.

These robots could be deployed in the event of a terrorist or enemy attack, such as a toxic compound released in an urban environment.

“The job of the robots would be to locate the source of the toxin as quickly as possible, map out the toxic gas plume to identify hazardous and safe regions and ultimately to neutralise the agent safely without having to risk human life,” Professor Garratt said.

“The same technology could also be used to respond to disasters like earthquakes where the main mission is searching for survivors.”