With robotics, autonomous systems, and artificial intelligence being a priority capability for Australian Defence, UNSW Canberra at the Australian Defence Force Academy is leading the way in educating students with smart and adaptive robotic platforms.

TAS CEO Professor Jason Scholz said the ethical component of AI was becoming increasingly important and there was a need for it to be integrated into education within this field.

“In August 2019, TAS conducted a workshop with Defence on ethical AI, the outcome of which included the technical report, A Method for Ethical AI in Defence,” Professor Scholz said.

“One of the recurrent themes at the workshop was the importance of education, particularly for commanders to be able to discharge their responsibilities for ethical AI. This educational element was necessary for applying the concepts of ethical AI including governance and traceability, developing trust in AI technologies and understanding its strengths and weaknesses.”

The UGV has so far been used during a live exercise with students called ‘Exercise Enigma’ with a view to progressively adding autonomous features to the platform.

UNSW Canberra researcher Dr Aya Hussein said the exercise was designed to integrate real-world scenarios into the curriculum, “taking the classroom to the wild”. 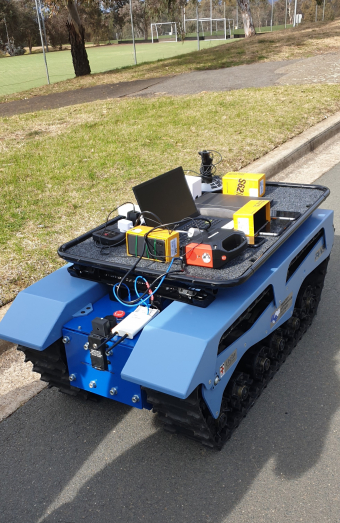 By supporting parallel engagement with the technical and ethical aspects of using this technology, the program aligns with the University’s cross-disciplinary approach to artificial intelligence.

“You could have a humanities student working on the ethics of artificial intelligence for this scenario, an engineering student exploring different battery technologies for the UGV, and a computer science student designing and developing the AI software,” Dr Hussein said.

President of UNSW Canberra’s Future of War Vocational Extra-Curriculum Club, Australian Army Trainee Officer and Bachelor of Science student, John Le, described Exercise Enigma as an eye-opening experience that allows you to build technological capabilities around the UGV and apply them in a military exercise.

“The biggest lesson from Exercise Enigma is how we can shape the future learning environment that fosters innovation, problem-solving and leadership,” he said.

“I liked how it challenged me to step outside of my comfort zone and attain a new skill set and perspective of my degree,” Miranda said.

Royal Australian Air Force Cyber Warfare Officer and second-year student Elliot Parker said the collaborative nature of the exercise was one of its strengths.

“I have learned a lot more about robotics, largely the software used, as well as being able to understand how to fit my skills with others, so that we can achieve the task at hand,” Elliot said.

Dr Hussein said it is a complex exercise to facilitate, but a necessary part of providing students with a well-rounded education.

“The concept requires highly skilled academics and robust students to pull it together and is relatively more expensive when you compare it to a classic classroom,” Dr Hussein said.

“But we need to ask, ‘do we want job-ready graduates or simply graduates needing a few more years after University to become truly job-ready?’

Professor Scholz said while TAS does not yet have a formal STEM program, the initiative was an important opportunity to bring together future Defence leaders and robotic technologies.

“This type of cross-disciplinary collaboration is vital as human-machine teams in the future must act in a way that empowers human agency, enhances action, and ensures moral responsibility,” he said.

Dr Hussein thanked TAS for supporting the acquisition of the UGV.

“I also would like to thank the UNSW Canberra team, they are high-skilled, high-performing, and self-motivated individuals who have been working tirelessly to make it all happens,” she said.