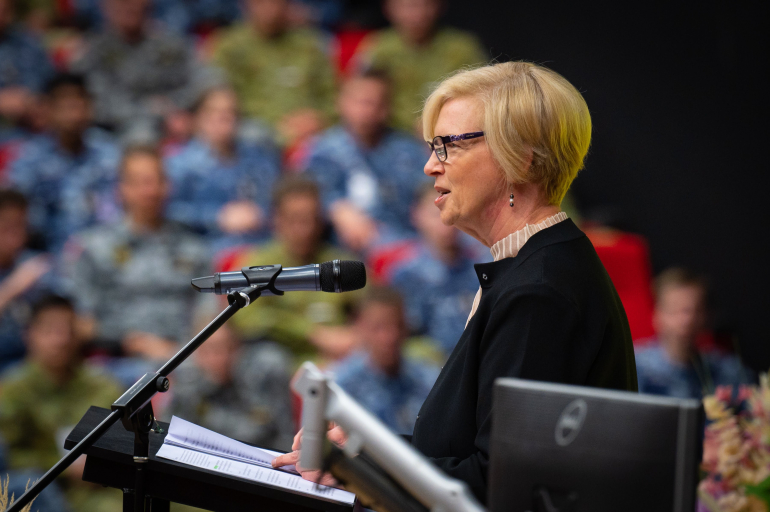 The annual University Lecture first began in 1992 as an opportunity to feature leadership, ethics and highlight Australia’s place in the world to UNSW Canberra’s undergraduate cohort and invited guests.

This year’s lecture—which returned in-person for the first time in three years—was delivered by Jennifer Wittwer, who discussed gender-responsive leadership in peacekeeping and deployments as an essential component of mission success.

“Gender equality is also not about women, other gender identities or marginalised groups conforming to the dominant group. It's about the dominant group allowing the space for those minority groups to access the same opportunities, resources, and power, and to express themselves in authentic ways,” Jennifer said in her address.

Within peacekeeping, Jennifer identified that leadership is an integral part in implementing a transformative approach to respond to and ideally mitigate the gendered, racial, and class inequalities the world faces.

“Increasingly, as the world has learned more about the evolving nature of conflict, wars and contemporary warfare, and their impact on men, women and other genders, gender-responsive leadership is emerging as a key factor in the ability of peacekeeping missions to achieve their mandate,” she said.

“I say gender-responsive leadership. Not just leadership that complies with policy, but one that drives change to benefit all people.”

This years’ University Lecture marks an important milestone as Australia celebrates the 75th anniversary of serving in peacekeeping missions.

Dr Rhys Crawley, an author of the Official History of Australian Peacekeeping, Humanitarian and Post-Cold War Operations, who will be joining UNSW Canberra as a senior lecturer in 2023, said that “the benefits to the people that peacekeepers have helped and protected, as well as the institutions from which they come, or to individual peacekeepers on a personal level, have been immense.”

The first peacekeepers were sent to Indonesia in 1947. Since then, thousands of Australians have been deployed to assist in establishing and keeping the pace in countries wrecked by war and conflict, or to help rebuild societies in the aftermath of disasters.

“For a long time, especially after the Vietnam War, these peacekeeping missions offered the only opportunity for Australians to serve in a multinational force overseas. In doing so, they gained experience of working in complex environments, working with foreign counterparts, and were ambassadors for Australia. Some were able to bring that experience back into their workplace,” Rhys said.

For 75 years, Australia has played a key role in keeping peace around the world and will continue to do so as gender-responsive leadership is employed for mission success.

“Understanding the gendered impacts of conflict and utilising the resources of peacekeeping to assist affected communities in achieving gender equality has become a priority for organisations responsible for peacekeeping,” Jennifer said.

The full University Lecture can be viewed on the UNSW Canberra YouTube channel.