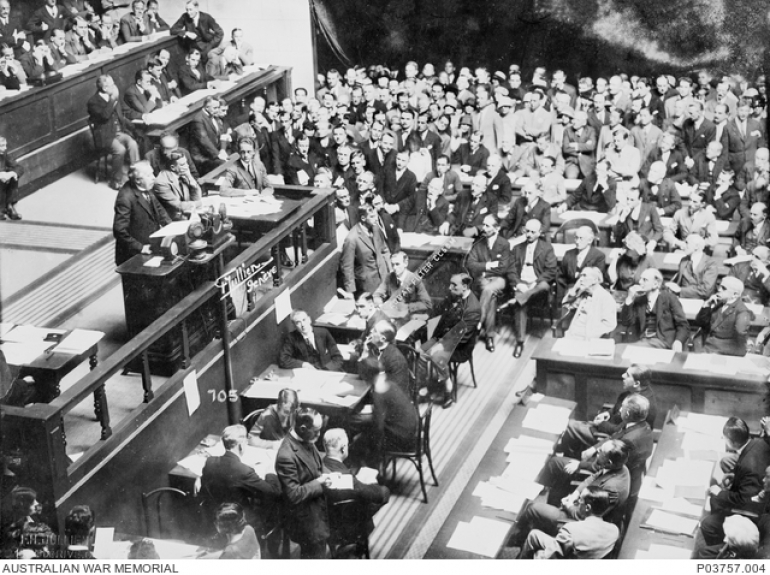 This month, UNSW Canberra reflects on the 100th anniversary of the Treaty of Versailles, which was signed on 28 June 1919, formally ending the First World War.

UNSW Canberra Historian Richard Dunley describes the treaty as “one of the most important and controversial documents of the twentieth century”.

The Treaty of Versailles ended the conflict between Germany and the Allied Powers and was one of five treaties drawn up at the Paris Peace Conference. Treaties were also signed with Austria, Bulgaria, Hungary and the Ottoman Empire.

“Together these documents had a profound effect on the history of the twentieth century, and in many places around the globe their impact can still be felt today,” Dr Dunley said.

Not only did dissatisfaction at the terms of the treaties contribute to the beginning of the Second World War, the Paris Peace Conference also reshaped the Middle East, creating many of the modern states in the region, including Iraq and Syria.

“It is frequently argued that many of the current problems stem from the failure of western diplomats 100 years ago to understand the region they were carving up,” Dr Dunley said.

However, Dr Dunley said there were also some positive outcomes from the Paris Peace Conference.

“Its most famous product, the League of Nations, did not succeed in preventing the Second World War, but did lay the groundwork for the creation of the modern United Nations,” he said.

Associate Professor David Lee said the Paris Peace Conference put Australia on the path to independence from colony to nation-state.

Australians were British subjects and the legislatures of the Australian Commonwealth and the states were subordinate to the Parliament at Westminster.

“Although the Australian delegates did not set out in 1919 with independence as an explicit objective, their efforts made a major contribution to Australia’s emergence as an independent nation-state in the Second World War,”  Dr Lee said.

A range of experts will also discuss Australia’s role at Versailles and the impact of the events in Paris at a UNSW Canberra conference, 1919-1939: Towards a new history of the interwar period, on 2 and 3 September.

UNSW Canberra historians are available for media commentary on the anniversary of the Treaty of Versailles and the Paris Peace Conference.