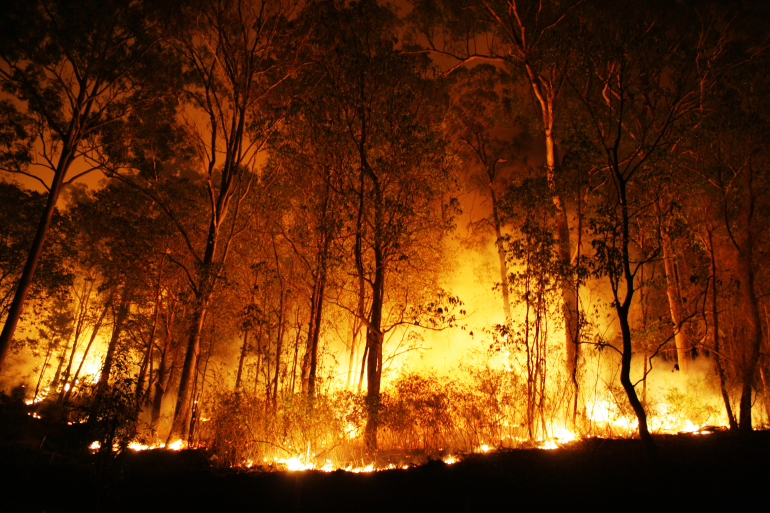 A bushfire burning orange and red at night. Photo: Shutterstock

UNSW Canberra researchers are working with the ACT Government to mitigate the risk of bushfires on the territory’s urban fringe.

As cities across the globe expand, the population living adjacent to nature reserves is rapidly increasing.

Dr Duncan Sutherland from the UNSW Canberra Bushfire Research Group said the most significant threat to structure loss in the urban fringe – where suburbs abut rural or bushland – is ember attacks, which occur when burning debris from a bushfire is carried by wind in a cluster.

During the 2003 Canberra bushfires, ember attacks were responsible for more than 90 per cent of the ignitions that resulted in the destruction of a house.

While there is strong evidence for the role that ember attack plays in the destruction caused by bushfires, Dr Sutherland said there was little known about ember transport at the urban fringe.

“Ember storms represent a fundamental gap in our knowledge of extreme fire dynamics, and in our ability to predict likely bushfire impacts,” Dr Sutherland said.

“This research will systematically address the problem of ember attack at the urban fringe and provide insights to help build resilience to ember attack in the so-called wildland urban interface.”

“The project aims to identify fire and weather conditions that lead to the formation of ember storms, as well as investigate urban design solutions that will minimise the impact of embers.”

There are three key stages of the project.

The first will determine threshold conditions for the onset of ember storms. It will examine information about forest type, fire weather and fire conditions to develop a model for predicting conditions conducive to storm development.

The second stage will analyse areas at risk of ember attack in the ACT, including areas impacted by the 2003 fires, new suburbs, and areas that have been targeted for future development.

The third stage will investigate how different urban design features impact ember attacks on the urban fringe. Computational simulations using a range of different variables, such as house size and shape, landscaping density and the location of greenspaces, will identify suburb configurations and design features that could reduce the risk of ember attacks.

The Bushfire Research Group at UNSW Canberra is world-renowned as a global leader in bushfire dynamics research. It has a strong track record of successful engagement with government and industry, employing sophisticated computational simulations to address real-world problems.

The project has received funding from the ACT Government’s Suburban Land Agency, as well as the Federal Government.

The research team will work closely with the Suburban Land Agency and a working group of members from other ACT Government organisations to ensure the outcomes of this project can ultimately be used to inform operational and urban planning decisions.

“Ensuring the resilience of communities in Canberra’s new suburbs is a key priority for the Agency,” CEO of the Suburban Land Agency John Dietz said.

“Working with UNSW on this research will help us – and other developers – begin to understand which urban design features could protect suburbs from the risk of ember attacks during bushfires.

“We’ll work closely with colleagues across the ACT Government to ensure the research can also be used where possible to make operational and planning decisions. The Suburban Land Agency will take on board any findings from the research that can help us plan and design suburbs to be more resilient in the face of bushfires.”