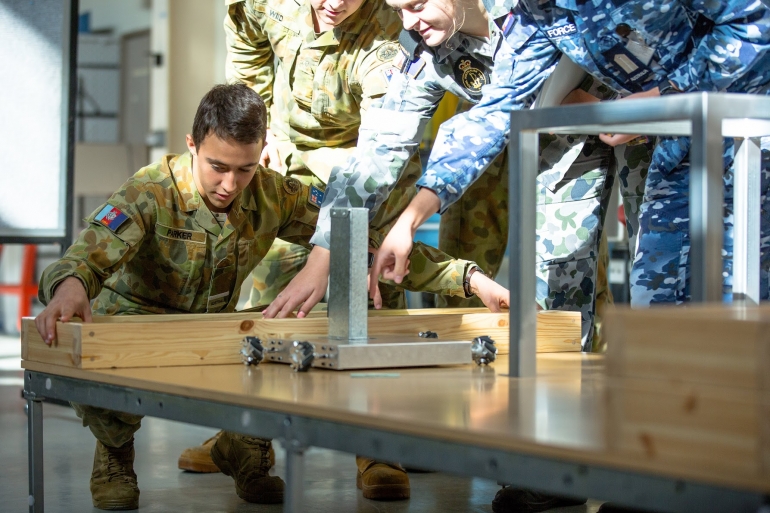 The people of Gondwana are once again in trouble and UNSW Canberra engineering students are bringing their systems to the rescue.

Student engineers have used their skills to help this small planet on the fringes of our galaxy overcome everything from droughts to nuclear contamination.

For 32 years, this fictional planet has served as the backdrop for the annual Warman Design and Build Competition, allowing second-year engineering students to take what they’ve learned in the classroom and apply it to a practical exercise.

Points are allocated to each team based on the performance of their autonomous system solution.

Since the event’s inception, the Warman Design and Build Competition has formed a central component of mechanical and aeronautical engineering studies at UNSW Canberra.

The popular competition is well known within the engineering community for its promotion of critical thinking and experiential learning. More than 60,000 engineering students have competed since the event began in 1988.

UNSW Canberra Associate Professor Warren Smith, a coordinator of the national event, says the competition allows students to take a concept from theory to a working product.

“This year, students are fully engaged to solve a unique problem in the context of emergency response,” Dr Smith said.

“Learning is achieved via an authentic immersive experience.”

Thirteen UNSW Canberra teams will compete against each other for a spot in the national finals.

Around 2500 students from twenty-five universities across Australia, China, Malaysia and New Zealand are competing in the 2019 event.

The national competition, managed by Engineers Australia, will take place from 18 to 20 October at the Powerhouse Museum in Sydney.

The Canberra final will take place in Adams Auditorium, UNSW Canberra at the Australian Defence Force Academy on Wednesday, 29 May.