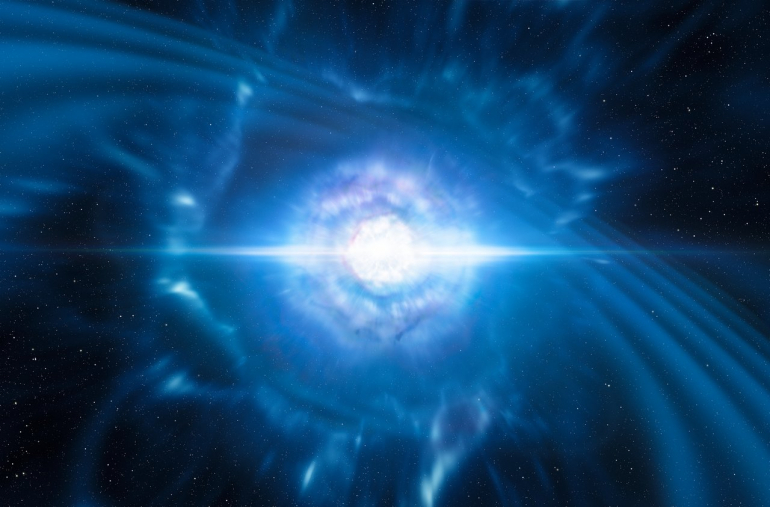 Two UNSW Canberra astrophysicists have played a role in helping scientists witness a cataclysmic event for the first time – the merging of two neutron stars, resulting in a kilonova explosion.

Dr Ashley Ruiter and Dr Ivo Seitenzahl from UNSW Canberra’s School of Physical, Environmental, and Mathematical Sciences were part of a collaboration of international scientists that contributed to the discovery, which has been published in the prestigious Nature journal today.  The paper, led by Professor Stephen Smarrt et al. can be read in Nature.

"This is a major breakthrough. This is only the second time we have seen gravitational waves from the merger of two neutron stars,” says Dr Seitenzahl.

Astronomers, using a fleet of telescopes from the European Southern Observatory (ESO), picked up the explosion on August 17, this year.

ESO says their telescopes in Chile detected the first visible counterpart to a gravitational wave source rippling the fabric of space-time.

Scientists knew, based on theory that if they had witnessed two neutron stars combining in an explosive merger then a visible light counterpart, known as a kilonova, would follow.

Astronomers around the world joined forces to use their telescopes to search for the new light source, which they described as looking for a needle in a haystack.

After a few hours, they found it – in a galaxy 130 million light years from Earth.

“The observations we took with the telescopes in Chile now unambiguously show that such mergers of two neutron stars create radioactive elements, which power the light emitted by the kilonova,” says Dr Seitenzahl.

"Though we know most elements in the Universe are created in stars - either quietly or explosively - we are now able to confirm that specific, heavy elements like silver were created in this neutron star merger,” says Dr Ruiter.

ESO says “the event marks the start of a new era of multi-messenger astronomy”.

“For the first time in history we can now combine light signals with gravitational waves to provide a totally new way to probe the Universe.”

Dr Ruiter and Dr Seitenzahl are part of the ePESSTO (extended Public ESO Spectroscopic Survey of Transient Objects) collaboration, which took the first spectrum of the event.