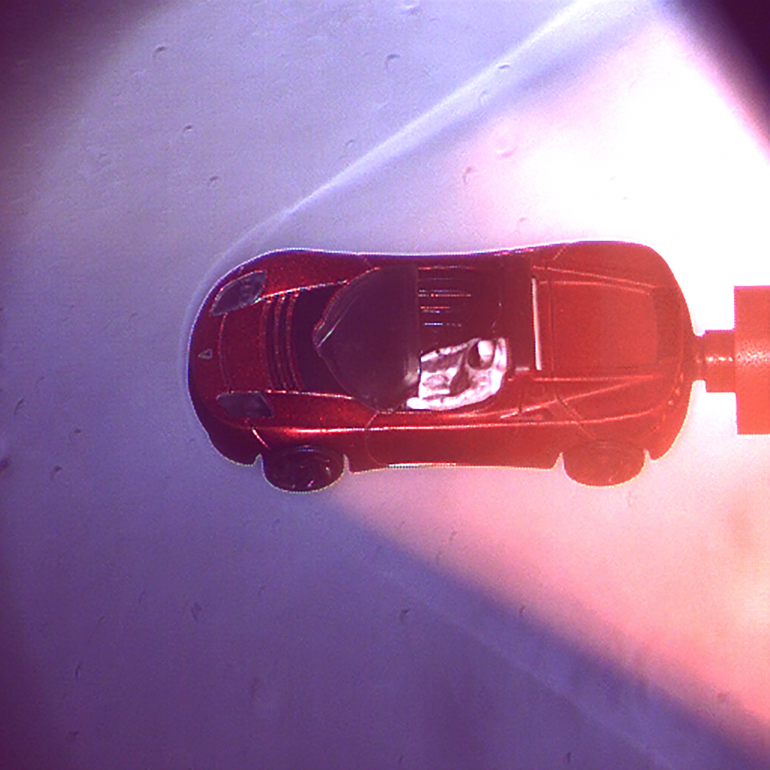 In general terms, when we talk about hypersonic flow, we’re talking about more than five times the speed of sound.

For UNSW Canberra Associate Professors Harald Kleine and Sean O’Byrne, recent experiments with hypersonic flow involved subjecting a scaled-down Tesla model to a flow that changed its speed from zero to 10,000 km/h in less than a millisecond.

Hypersonics is a flow regime that is marked by very high speeds (as a rule of thumb, more than five times the speed of sound) and high temperatures above 1500 °C. The test facility T-ADFA at UNSW Canberra allows one to create such flows for a short time, typically a millisecond or two.

A/Prof Harald Kleine is an expert in density-sensitive flow visualisation, and he explained the pattern emerging from the model Tesla into the test section of the tunnel is the result of a major bow shock that occurs whenever an object travels faster than the speed of sound.

“If we had a higher density in the flow, we would also see additional but weaker shocks that are generated by the windshield and other parts of the car,” A/Prof Kleine said.

“The waves tell you where there are positions of very strong or very high load, where waves impinge on or get very close to the object. This indicates areas experiencing very high pressure and very high temperatures.”

The video footage, which was shot at 14,000 frames per second, shows a flowfield that exists only for a few milliseconds in the test facility.

The experiment was conducted while the researchers were setting up a new visualisation system to look at hypersonic flow.

A/Prof O’Byrne said the team decided to put a Tesla Roadster model into the test section of the hypersonic tunnel to mimic Elon Musk’s 2018 experiment that launched the full-sized version into space.

“We wanted to see what the flow around the Tesla Roadster would look like,” A/Prof O’Byrne said.

“But there is a serious reason for why we’re doing the experiment, and that’s because we are doing experiments on a phenomenon called transition from laminar to turbulent in hypersonic flow.”

A/Prof O’Byrne explained that it is really hard to predict where this transition happens, which is why the team is collaborating with the US Air Force Academy in Colorado Springs. The tests to investigate this phenomenon will, however, be conducted with a model of a much simpler shape than the Tesla Roadster, namely a cone.