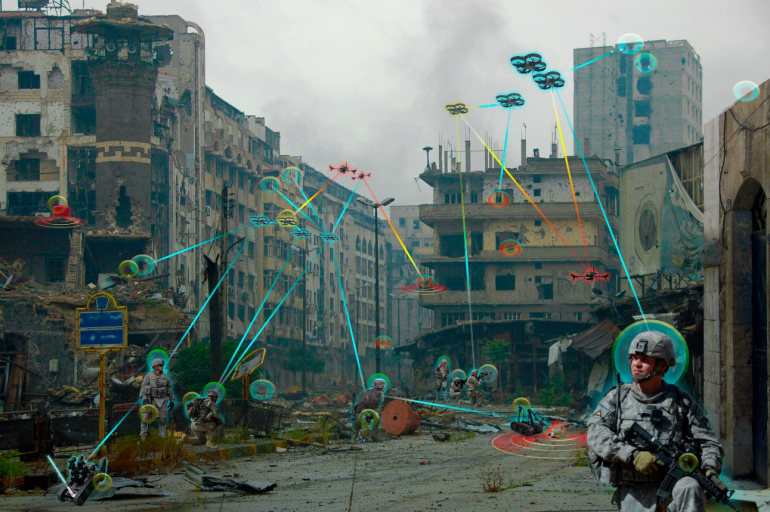 An illustration depicting the use of Internet of Battlefield Things technology in an unstructured, chaotic urban environment. Image: CCDC Army Research Laboratory via Wikimedia.

Funded by the Defence Science and Technology Group and led by Dr Nour Moustafa, the team will develop a platform that identifies and prioritises cyber risks for Internet of Things (IoT) enhanced combat systems without human interference, using artificial technology.

“The emergence of IoT has significantly improved combat systems and enhanced their flexibility and management,” he said.

“An IoT paradigm connects physical devices, such as sensors and actuators, to the internet to monitor and control them and facilitate various automated services.”

IoT has been integrated with military and defence systems – the Internet of Battlefield Things (IoBT) or IoT-enhanced combat system – creating a network of sensors, wearables and IoT devices.

“IoBT is an IoT category for combat and warfare operations,” Dr Moustafa said.

“For example, in the maritime industry, the IoT-enhanced combat systems optimise and streamline every aspect of operations at sea, at the port and across the fleet – from ship tracking and predictive maintenance to crew safety and welfare.

“IoT-enhanced combat systems are also constituted the modern aviation industry to enhance the command, control, surveillance, and maintenance of multiple aspects of aircrafts and ships.”

The project's primary goal is to examine the cyber risks to the combat systems when interfacing with untrusted external IoBT environments.

“The expected outcomes will significantly advance scientific research in the existing cybersecurity literature and strengthen Australian cybersecurity and combat systems capabilities in protecting them against cyber threats nationally and globally,” he said.