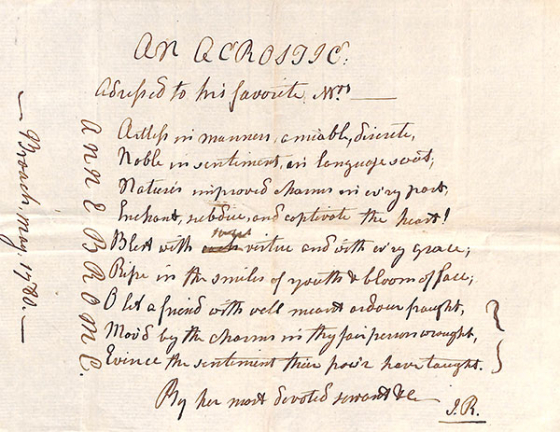 Lieutenant Colonel James Romney (b. January? 1734), writer, poet and dramatist, was a British officer in the East India Service (1779-1804), who often wrote on long voyages as a way of passing time at sea.

This acrostic love poem was penned by James whilst attached to the Bombay Army in Broach (now Baruch), Gujarat, Western India in May 1780.  The first letter of each line spells out the name of his romantic interest Anne Brome (possibly a daughter of Charles Brome, assistant to Thomas Mostyn, the British envoy to Poona). Despite Romney’s poetic ardour, it remains tantalisingly unknown whether the verse had the desired effect on the object of his affections.

You can find out more about the literary manuscripts of James Romney (MSS 313) in our Special Collections finding aid.  Additional papers of James Romney are held in the British Library at MS Eur F 198 and MSS Eur F 254.

An early portrait of James by his brother hangs in the Abbot Hall Gallery in Cumbria https://www.artfund.org/supporting-museums/art-weve-helped-buy/artwork/4212/portrait-of-james-romney, and another (painted c. 1760-62) forms part of the Yale Center for British Art collection https://collections.britishart.yale.edu/vufind/Record/1667632.