Greetings from the trenches 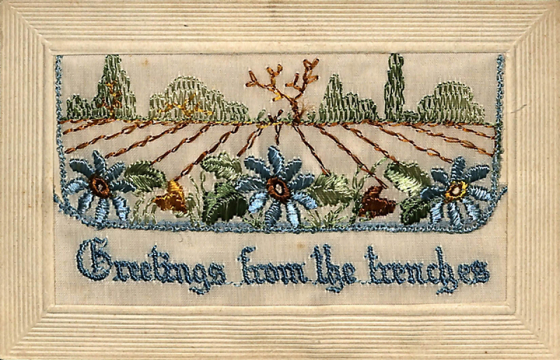 A silk postcard sent by Private William Saunders in France to his mother in Australia during World War I.  The decorative cards were produced in large numbers and were a very popular form of communication for soldiers, with an estimated 10 million being produced in a combined machine woven-hand finishing process in the period 1915-1919.

Saunders was born at Goodooga, NSW and enlisted in the Australian Imperial Force on 15 October 1915 at the age of 21.  After training at the Liverpool camp (Sydney) and then in Egypt, he arrived in France in June 1916, serving as a driver with the 4th Division Ammunition Column.  The card appears to have been sent soon after Saunders’ arrival on the Continent- the inscription on the reverse reads ‘To Dear Mother, with fond love from Hilton, 1.7.16, Somewhere in France’, and is accompanied by the original thin brown paper envelope and a smaller ‘gift’ card also inscribed to his mother.

Saunders returned to Australia in May 1919, first running a butcher's shop and bakery and then shearing, before operating a mixed business in Sydney during the Depression.

Find out about other papers relating to William Hilton Saunders in our Special Collections finding aid (MSS 64). And read more about his WWI experiences, including extracts from his diaries, on the 1915 Coe-ee March website.