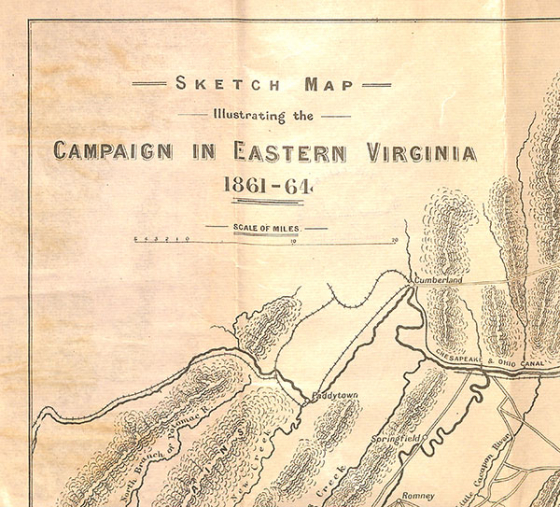 Why would a map showing parts of Virginia and Maryland be produced in London in 1912? Forster Groom’s map is a reminder of the powerful influence the American Civil War exerted upon the officers of the British empire for half a century.

In 1889 Captain George Henderson (1854-1903) became Instructor in Tactics, Military Law and Administration at the Royal Military College, Sandhurst, having already published an anonymous book on the battle of Fredericksburg. In 1898 he published Stonewall Jackson and the American Civil War, which became a seminal text in the professional education of several generations of army officers in Britain and its empire, including those who commanded in the world wars. Henderson celebrated Jackson’s initiative and daring, offering him as a model and inspiration for the empire’s aspiring military leaders.

Before Henderson’s study, European officers had largely deprecated the lessons the Civil War might teach – Helmuth von Moltke supposedly (and perhaps apocryphally) dismissed its armies as ‘two armed mobs chasing each other around the country … from which nothing could be learned’. Henderson’s Jackson placed the Civil War, and especially Jackson and his audacious Shenandoah campaign, at the centre of British military education. This map was intended to assist officers sitting the ‘military history examinations for promotion’, and came with a set of flags to enable students (Henderson’s readers) ‘to follow the campaign easily’. Indeed, Australian officers sat promotion examinations based on it into the 1960s, and this item came from RMC Duntroon.

The map itself was surely intended to aid Henderson’s readers. But they used it not as visitors to the United States – few British officers would ever visit the Shenandoah Valley – but as students, poring over it, tracing the routes of the extraordinary marches performed by Jackson’s ‘foot cavalry’ as his 17,000-strong Confederate force fenced with and repeatedly defeated Union forces three times its size at the centre of this map.

Forster Groom’s map immediately suggests paradoxes and questions, both about the campaigns whose terrain it represents and the uses to which they were put. The Shenandoah Valley cuts across the map diagonally, showing how it offered (for Confederates) a route from northern Virginia to threaten Washington (and the illustrating prevailing assumption, fostered by theorists like Henderson, that the seizure of an enemy’s capital represented check-mate). But neither the Army of Northern Virginia nor the Army of the Potomac actually used the valley in the war’s decisive campaigns.

Bedazzled by Jackson’s flair for rapid decision and bold manoeuvre, Henderson directed generations of British Empire and Commonwealth officers to arguably the wrong bit of Virginia. For what this map also shows are the battlefields on which the Civil War would actually be decided: the costly clashes of the Wilderness, Cold Harbor and Petersburg. Those gruelling battles displayed none of the grand tactical brilliance which Henderson so admired in Jackson, but which demonstrated lessons applicable in the vast world conflict which many of Henderson’s readers fought and died: did they ask the wrong questions and learn the wrong lessons?

You can search for and make an appointment to view this and other Special Collections rare publications via the UNSW Canberra Search Gateway.