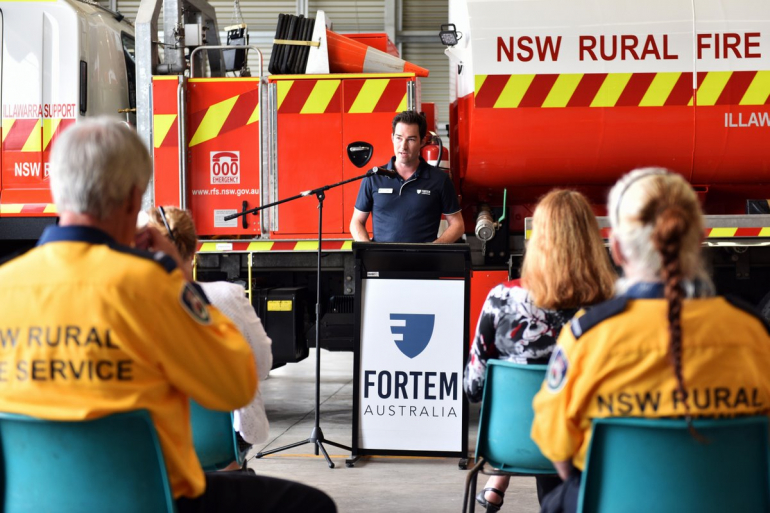 As a co-founder of Soldier On and Fortem, UNSW Canberra alumnus John Bale has learnt a thing or two about mental health. One of the most valuable lessons has been the importance of building ‘mental fitness’ and preventative mental health care.

With 12 years in the Army and three UNSW Canberra degrees under his belt (Bachelor of Arts – History, Master of Arts in Strategy and Policy, and a Master of Management studies), Mr Bale joined forces with his wife, Dr Danielle Clout, and ADF colleague, Cavin Wilson, to create Soldier On, an organisation that has supported thousands of veterans and their families.

Created after a friend was killed in Afghanistan, Soldier On originally focused its efforts on supporting those who had been injured physically and psychologically in the line of duty and the families left behind. However, it evolved to provide a more holistic approach to mental health.

“As we grew the programs, we also recognised that we could support everyone in providing better preventative mental health,” Mr Bale said.

“Over the almost 10 years since we started this journey with Soldier On, I've learned a huge amount and spoken to some of the best minds when it comes to mental health.

“People don't look at mental health the same way they do it as physical health. With physical health we try to keep ourselves relatively fit. We do that because we know if we don’t, we have a higher risk of injury and once we’re injured it takes longer to recover. The exact same thing is true when it comes to mental health.”

In 2019, when he co-founded Fortem, an organisation aimed at supporting first responders, the focus on prevention was ingrained within its ethos from the very start.

“It’s really mental health by stealth – we get people together, we do fun activities that actually are about connecting people, so that they can talk about these things and also recognise that there is support if they are feeling some of the early warning signs,” Mr Bale said.

Mr Bale said first responders were heavily impacted by the Black Summer bushfires, and unfortunately for most of them, it’s not the first or last trauma they will have to face in their line of work.

“We had people who had lost family members, who had seen huge destruction and ultimately, many of them are volunteers as well,” Mr Bale said.

“These are people who put the uniform on after hours on weekends and sacrifice a lot of their time to protect their community and then to see that community in many instances destroyed, it was really horrendous.

“In many instances, we've been the organisation to foster that ability to talk through what they've seen and the impacts of that and we're trying to do two things: support them through that trauma, but also – to be frank – get them ready for the next one. It hopefully won’t be on the same scale as Black Summer, but we know in Australia that disasters do occur regularly.”

So how do you build mental fitness? Mr Bale said it’s about seeking that help and doing the work before you hit the point of crisis.

Fortem’s programs are underpinned by ‘Five Ways to Wellbeing’: a set of practical lifestyle habits to maintain mental fitness. They include: connect, be active, keep learning, be mindful and help others.

“We need to change the conversation, so that it's not just stories of post-traumatic stress disorder and depression, anxiety, and mental health breakdowns,” Mr Bale said.

“We should look at the positive stories of how someone was able to get through a really tough situation because they had really focused on their mental health and their resilience.

I think there's a real opportunity here for us as a community to do better and to really talk about mental health holistically."

Read our Alumni Business in Focus Q&A with John Bale