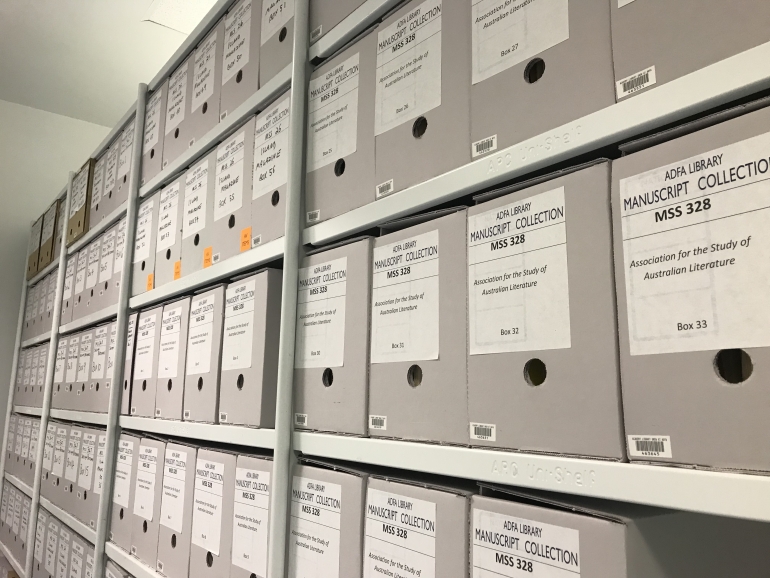 How does Special Collections support your research?

Special Collections is a rich resource of hundreds of unique contemporary manuscripts and uniquely held rare books which are available for your next research project. Our archival collections also include photographs, film and audio recordings, posters, maps, plans, stage and set designs, objects and more.

Special Collections is a separate research unit of UNSW Canberra, led by the Associate Dean Special Collections (Professor Nicole Moore).  The unit works closely with the Academy Library, Canberra and the UNSW Sydney Library in delivering services to researchers but is not administratively part of either library.

The Research Guides provide wonderful starting points to narrow down broad research areas, such as finalising a PhD question/topic.

Browse our library of Research Guides to inspire and inform your next research area, teaching program or assignment.

Where will your Special Collections research take you?

We can help you access a stimulating array of original source materials, provide ideas for teaching and learning, supply digital images, and guide you on copyright and reuse.

Your research may be towards a thesis, publication, class, collaboration, audiovisual project, live performance, poetry reading, artwork or personal interest—the possibilities are endless and limited only by the imagination.

Presentations and publications by external researchers

Lorraine Tinsley, "The Uncrowned King and the Desert Queen: T.E. Lawrence and Gertrude Bell - A Friendship". The Journal of the T. E. Lawrence Society, forthcoming.

Wouter Van Acker, “Peter Corrigan, the Bodgie Wolf and Other Larrikin Tigers of Wrath,” Fabrications: The Journal of the Society of Architectural Historians, Australia and New Zealand, 28.1 (2018): 3-24.

Ian Beckett, “ ‘A British Profession of Arms: The Politics of Command in the Late Victorian Army’ (published by Oklahoma University Press 2018), has been shortlisted for the Templer Medal of the Society for Army Historical Research, awarded annually by the Society for Army Historical Research to the best book on British military history published in the previous year.

The Special Collections team have assisted a Victorian community project honouring Minjungbul/ Goernpil/ Noonuccal/ South Sea Islander woman Lisa Bellear. Bellear was a poet, artist and activist. We are helping the project gather resources relating to Bellear’s work to celebrate her legacy within the local community and enable a street or building to be named after her.

Researchers from the Australian Dictionary of Biography are also compiling a tranche of new biographies, particularly on women.

“Thank you for going to such great lengths to locate and digitise the only copy in the world of 'What to do if taken prisoner of war in the Pacific'. I greatly appreciate it and passed a copy on to the Defence Honours and Awards Tribunal. Thanks again.”

“It is incredibly generous of you to have digitised this rare literary manuscript from 1790 for me and to send it so quickly. If only all special collections librarians had such excellent customer service! I truly appreciate it.”

“Thanks so much for all your help when I visited the library last Friday to consult the Nancy Cato papers in the Archive collection. As I told you, I was able to find several items of enormous interest in her Correspondence file, which I shall certainly use in publications about her and her work. This is the second time I’ve had the opportunity to consult some of the writers’ papers in the Special Collection. It is an extremely valuable collection for anyone researching Australian literature – a national treasure! Thank you again.”